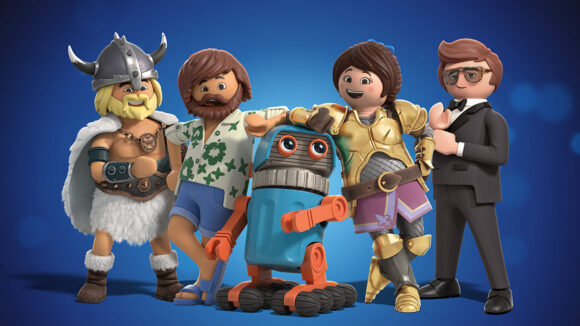 The makers of the animated/live-action hybrid Playmobil: The Movie offered a first look at the film today.

Playmobil, based on the German line of kiddie toys, will be the third toy-based feature animation release of 2019, along with The Lego Movie 2: The Second Part and Uglydolls.

When her younger brother Charlie (Gabriel Bateman) unexpectedly disappears into the magical, animated universe of Playmobil, unprepared Marla (Anya Taylor-Joy) must go on a quest of a lifetime to bring him home. As she sets off on a fantastic journey across stunning new worlds, Marla teams up with some unlikely and heroic new friends – the smooth-talking food truck driver Del (Jim Gaffigan), the dashing and charismatic secret agent Rex Dasher (Daniel Radcliffe), a wholehearted misfit robot, an extravagant fairy-godmother (Meghan Trainor) and many more. Through their vibrant adventure, Marla and Charlie realize that no matter how life plays out, you can achieve anything when you believe in yourself!

And here’s footage of some children reacting positively to the teaser in case you’re wondering what its intended audience thinks about it:

It’s being animated in Montreal, Canada at On Animation Studios, which previously produced Mark Osborne’s The Little Prince. Movie was co-financed by Vivendi-owned Studiocanal, which is also behind Aardman’s Shaun The Sheep Movie: Farmageddon.

American distribution was set to be handled by Global Road, but the distributor recently declared bankruptcy, so it’s not immediately clear who will distribute in the U.S. Lionsgate is handling world sales for the film.