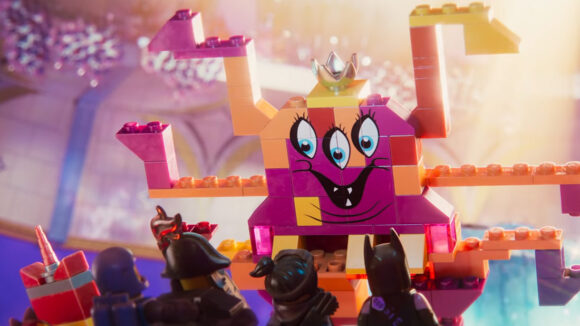 Trailer time continues this week with one for The Lego Movie 2: The Second Part, the follow-up to Warner Animation Group’s unexpected 2014 hit The Lego Movie.

It’s been five years since everything was awesome and the citizens are facing a huge new threat: LEGO DUPLO® invaders from outer space, wrecking everything faster than they can rebuild. The battle to defeat them and restore harmony to the LEGO universe will take Emmet, Lucy, Batman and their friends to faraway, unexplored worlds, including a strange galaxy where everything is a musical. It will test their courage, creativity and Master Building skills, and reveal just how special they really are.

The Lego franchise has been a case of diminishing returns for its studio, Warner Bros. Whereas the first film grossed $469 million worldwide, the second film, The Lego Batman Movie (2017), generated just $312 million in global box office, while the third one, The Lego Ninjago Movie (also 2017), crashed and burned with a meager $123 million.

One gets the feeling that Warner Bros. was so desperate for a feature animation franchise that they jumped head-first into their first success without fully accounting for whether the positive audience response to the project was due to its novelty factor or true audience investment in the film universe. The challenge now for Warner Bros. will be to convince audiences that this latest film is, in fact, a legitimate entertainment experience and not a sales pitch for buying toys.

Advertising a specific toy line in the movie synopsis, as Warner Bros. does above, isn’t exactly a reassuring sign that the creative impetus for The Lego Movie sequel was independent of its toy sales purpose. Also concerning is that the film lists 13 producers and executive producers, which is double the standard number of producers on an animated feature. Disney-Pixar’s Incredibles 2, for example, had two people in the producer/executive producer roles; Illumination’s The Grinch had five.

Animal Logic produced the animation. Trisha Gum is the animation director, and Mark Mothersbaugh did the music.