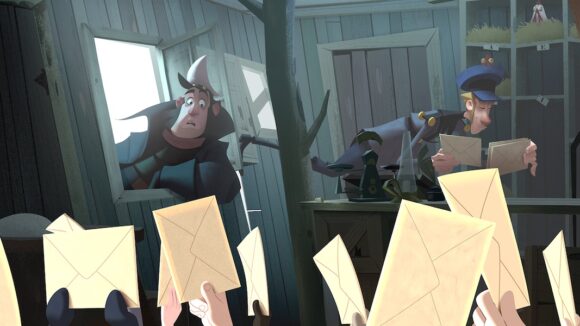 If you work as a 2d character animator in the States, you don’t get offered a job on a major studio feature every day.

In fact, the decline of hand-drawn animation in the country is one reason why Sergio Pablos, a star artist of Disney’s 1990s renaissance, eventually returned to his native Spain. When he started production on his new feature Klaus, he recruited his team from all over — including the U.S. Enter Matt Williames, a gifted animator based in Oregon.

Since graduating from Calarts in 2001, Williames has stuck it out in the 2d industry, where his work as a character animator and designer has taken him to most major studios in the country. His credits include Disney’s The Princess and the Frog and Mary Poppins Returns, Laika’s Coraline, Dreamworks’s short film Kung Fu Panda: Secrets of the Scroll, and Warner Bros.’s forthcoming DC Super Pets.

For Klaus, which was animated at Pablos’s SPA Studios in Madrid, Williames was hired to supervise Mogens, the hard-bitten ferryman who serves as a foil to protagonist Jesper. Cartoon Brew caught up with the animator to discuss how he went about bringing this curious character to life. Williames’s comments are taken from longer answers sent by email.

Williames: About three years ago, Sergio asked me if I would be interested in relocating to Spain to supervise one of the lead characters. While I was deeply flattered, it wasn’t the right move for my family, so I asked if I could possibly do a smaller character. I read the script and felt Mogens was somewhat of a blank slate. That attracted me to him, as I felt there was room for me to develop it a bit.

To me, Mogens is a very hurt human being who has checked out of life and emotionally keeps everyone at a distance. His goal is pleasure, and making the pursuit of pleasure your ultimate goal leads to a meaningless existence. He is the kind of character that could be really irritating and one-dimensional if not handled with some level of charm and subtext. With every moment of snark, I tried to handle it with an equal measure of charm.

Torsten and I went back and forth on Mogens’s design for a few weeks. In the meantime, Torsten was teaching me the aesthetic of the film. One of my personal challenges was the high level of detail. I tend to favor less detail. It is easy to lose appeal with so much going on, [so we had to focus on] composing those details in a pleasing way.

Once we had something we liked, I did some test animation. I learned a lot from those tests, not just in his design but also about him as a character. Soon after I started animating production shots. Because Mogens wasn’t totally nailed down from the beginning (like Jesper), his design developed over the course of the film, but not enough for the general audience to notice.

[Klaus was conceived as a film with groundbreaking lighting and texturing tools, and this] forced me to be mindful about graphic cheats and how to treat them. The lighting forces you to be really conscious of volume and form, which can be tough when a design is cheating something. In particular, Mogens’s jaw, beard, and hat were all very graphically represented, but also had to work dimensionally for the lighting team to do their job.

Williames: I animated the majority of Mogens’s footage. As the story developed, so did his role in it, and by the end of production I had to give out a lot of footage simply to get things done on time. The person I leaned on the most heavily was Sam Cabanac, a young animator who showed tons of potential. I never really had to explain Mogens too heavily to him.

I remember telling my wife that Mogens is kind of a crooked character. So, subconsciously, I was drawing him leaning over a lot. I noticed I was doing this, and when I got to the scene where Jesper is leaving the island I knew I wanted something to reflect the internal status of Mogens’s character arc. Here, he changes from being a passive to an active character.

When Mogens realizes that something very real is going on inside Jesper, he does a strange stagger. My thought was that he was being caught off guard by his own emotional response to Jesper leaving. He has stifled his emotions for so long that when he felt something genuine for someone it was a strange thing for him… almost like a stifled sneeze or something. After a beat I began to straighten him up.

The obvious visual correlation is he is going from crooked to straight, insincere to sincere. Half-lidded eyes to fully open eyes. I even tried to diminish the darkness of the underside of his eyes to show that there is new clarity to him as a character.

Williames: Honestly, I was very nervous about doing this character. Sergio is known for having a very high standard, and I wondered if he would be overly controlling in his direction. But he was both direct in what he wanted, and hands-off in letting you do it your way. He seldom gave notes, and when he did they always made sense.

Sergio is a giant of our craft. I wouldn’t say I actively referenced his work when doing Mogens, but the influence of his acting choices is always there in the background. I wanted Mogens to have the level of specificity that the best live-action actors bring to their characters. I don’t feel that we animators are always digging as deeply as we make people think we do. Comfort is the enemy of innovation, and the thing I loved about working with Sergio was how uncomfortable I was when trying to make a very specific character.

“Klaus” is available to view on Netflix. 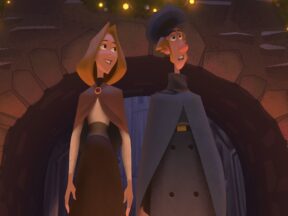 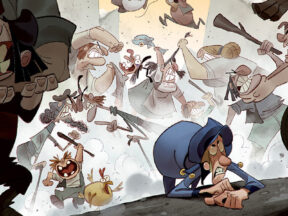