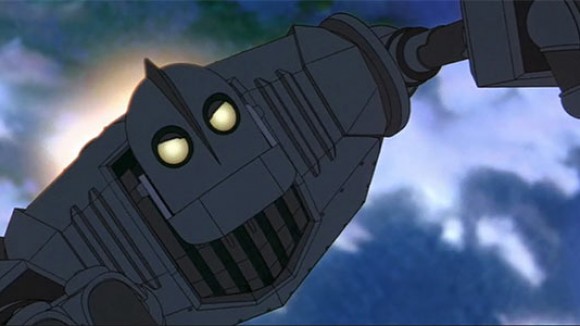 UPDATE: The Blu-ray release that we reported earlier has not been confirmed. We reached out to a Warner Bros. publicist and this is what they told Cartoon Brew: “Blu-ray plans have not been announced yet. [The Iron Giant: Signature Edition] will be available digitally from digital retailers in the fall.”

Remastered with two new scenes, the signature edition of director Brad Bird’s masterpiece of war and peace will have its world premiere on Sunday, September 13, at the Toronto International Film Festival (TIFF).

Despite the fact that The Iron Giant was depressingly ignored upon its 1999 release from a disinterested studio to mostly empty theaters, early adopters of the film had hoped this day would come. With paranoia and apocalypse currently reaching a fever pitch, we desperately need a sentient, sweet robot protagonist with the defiant catchphrase, “I am not a gun.”

A trailer for the new edition was released yesterday, and it effectively conveys the film’s scope:

Compare it to the original trailer, which sold the film as pure kiddie fodder:

The Iron Giant: Signature Edition will screen twice during TIFF (incidentally, as part of its kids’ programming block) before its nationwide limited engagement screenings on September 30 and October 4. Tickets for those screenings can be ordered now. Don’t disappoint Brad; he really wants you to see it:

In THEATERS again, for 2 showings only. Let 'em know you care! Buy your tickets today! https://t.co/cxS4eabvCd

Warner Bros. has confirmed that a Blu-ray release will follow this fall.

It also won’t likely be long after the The Iron Giant: Signature Edition’s rebirth that Bird’s movie is properly elevated into the higher echelons of cinema history. With nearly two decades of growing cultural power beneath its indestructible belt, The Iron Giant is shaping up to be as potent and memorable as Kubrick’s Dr. Strangelove.