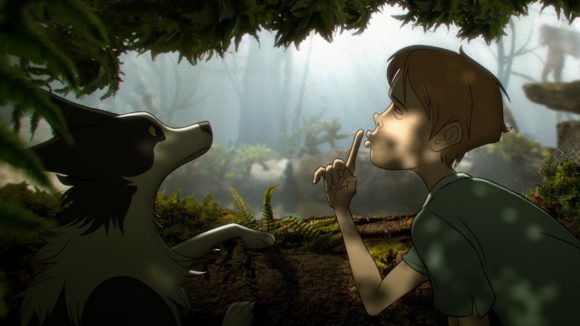 At last week’s Cartoon Movie market, one of the most attended presentations was Kensuke’s Kingdom, a 2D and mixed-media feature film from industry veterans Neil Boyle and Kirk Hendry.

Based on the bestselling novel by War Horse author Michael Morpurgo and adapted for the screen by screenwriter Frank Cottrell Boyce (Hilary and Jackie, Welcome to Sarajevo, The Railway Man), Kensuke’s Kingdom follows the story of a young boy who washes up on a tropical island overseen by a mysterious Japanese soldier named Kensuke, who lives there with a family of orangutans as his companions.

When we first previewed the project in 2015, it was still early in development. At Cartoon Movie it was announced that several high-profile production companies have boarded the feature: London’s Lupus Films, which most recently produced Ethel & Ernest, and Luxembourg’s Melusine Productions, whose credits Ethel & Ernest, Song of the Sea, and Ernest and Celestine.

Kensuke’s Kingdom has strong themes of ecological conservation and respect for the environment, including a climactic showdown with poachers who are trying to overtake the island, and directors Boyle and Hendry have spent time investigating the best approach for visualizing the natural world onscreen. They’ve come up with a solution that balances organic elements with digital compositing, and which is both unique and visually striking.

“The natural world is an essential character in this story and one thing we were keen to achieve was an organic feel to the environment,” said Boyle, whose animation credits include The Thief and the Cobbler and Who Framed Roger Rabbit. “We wanted to use reality, rather than model builds. We wanted it to look damp. With our test sequence, we filled it with many objects we found on the forest floor or rocks we pulled out of the Thames. They all had their own wonderful slime, cobwebs or dead bugs that you could never production design. We were curious to see what we could just find in nature and use.”

Added Hendry: “Something that we have been focusing on in the last few years is the creative blend of mixed media. We like to see how the things we love can inhabit the same space — the charm of 2D hand drawn characters, the depth of photoreal worlds, the character of miniature environments, matte paintings and the random nature of filmed effects footage.”

The filmmakers aim to book-end the animated portions of the film with live-action. They are still developing the final look of the film, but the goal is “to do as much of the film as possible as partial miniature sets with found objects, then extended with matte paintings” Hendry explained to Cartoon Brew. “We just like the look. It’s random, organic and connects with the theme of the piece. It’s different — and its more fun to work this way.”

While the producers continue to build a team of production partners, Boyle and Hendry are moving forward with the development of the animatic and further production design for characters and environment.

Boyle notes that the process is more organic on this film than many projects he’s worked on in the past. “On many productions you sign off on a written script and then pass the project over to artists to visualize in storyboard form, almost like they’re two separate processes,” he said. “For Kensuke’s Kingdom, we’re planning to continue working really closely with [screenwriter] Frank Cottrell Boyce, brewing up the most exciting and visual way we can tell this story, batting back and forth dialogue and imagery until we’ve found the best way to translate Michael Morpurgo’s classic book into cinematic form. It’s a tremendously exciting process.”