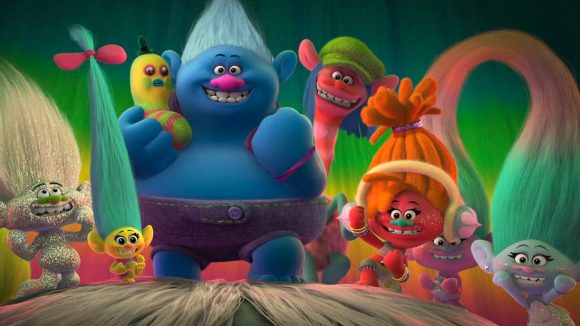 It’s weird to see Dreamworks making an unapologetic cartoon with its 27th CG film. They’ve come close before, but the tone of the studio’s work has always remained firmly rooted in the world of live-action, never quite managing to achieve the level of anarchic cartoon comedy. I’ve got doubts whether this film will cross over completely (26 prior CG films is a pretty good indication of a studio’s mindset), but at the very least Trolls’ production design is imaginative and appealing, and both characters and settings use a consistent design language that conveys cartoon fantasy. (Kendal Cronkhite and Timothy Lamb are production designer and art director, respectively.)

Directed by Mike Mitchell (director, Sky High, Shrek Forever After, Alvin and the Chipmunks: Chipwrecked) and Walt Dohrn (a veteran writer on Dexter’s Lab, Spongebob Squarepants, and Shrek 2), Trolls will be released on November 4 in the United States. No major animation releases are scheduled for the month of October and Moana doesn’t open until late-November, so Trolls will enjoy a wide-open family animation marketplace.