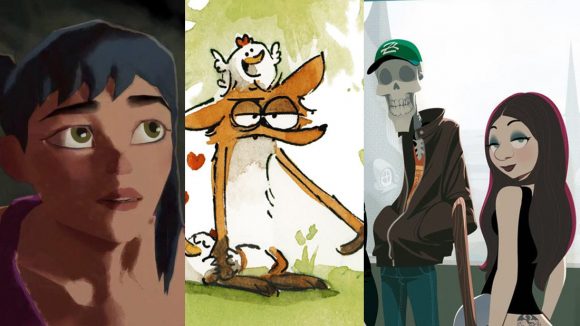 This week in Bordeaux, France, Cartoon Movie showcases over 50 animated feature films, all in different stages of production. Like no other, the three-day pitching event offers a glimpse into the exciting future of European feature-length animation.

At the Anima Festival in Belgium, Cartoon Brew sat down with three creators presenting at this year’s Cartoon Movie — the French directors Arthur de Pins (Zombillenium) and Benjamin Renner (Ernest & Celestine, The Big Bad Fox), and Ivan Cappiello and Carlo Stella of Italian studio MAD Entertainment (The Art of Happiness, Cinderella the Cat, A Skeleton Story) — to talk about the joys and difficulties of directing feature-length animation in Europe.

Zombillenium is based on a graphic novel, also by de Pins, for which the work took place in three different places across France, as well as Belgium. With a budget around €13.4 million (US$14.1 million), the film was produced using computer animation, but has a 2D look that looks more like its graphic novel origins. It stars zombies, vampires, and a tattooed heroine, and includes elements of social commentary in a family-friendly package.

The younger-skewing, 2D hand-drawn kids’ film The Big Bad Fox, which also started out as a graphic novel, was intitially conceived as a 26-minute television special before finally turning into a full-length film. While Ernest & Celestine had €9.6 million to spend, The Big Bad Fox had to make do with €2.5 million, because of its original conception as a television special.

If the above budgets already seem small compared to American productions, you’ll be even more surprised to learn that the computer-animated Cinderella the Cat, scheduled for release this year, has a minuscule budget of €1.3 million. In the film, Italian studio MAD Entertainment manages to create an intense, dark sci-fi adventure based on the classic fairytale.

So, how does a European filmmaker deal with a budget that’s about 1% of contemporary Disney productions? “We try to build a story that we can handle with the budget we have,” Cinderella the Cat director Cappiello told Cartoon Brew.

“We make a beautiful house,” producer Stella added. “We don’t make a skyscraper that will fall apart and that doesn’t have a soul.”

Renner continued: “I’m not really proud of this, but there’s a huge scene of maybe 40 seconds, where the characters are stuck in a cardboard box. I just drew the cardboard box with the eyes inside, just moving in the screen. And so there’s no background, no animation. And yet it’s describing a very complex scene; they’re being moved into a truck, moved into a plane that takes off, and everything.” While the initial reason for this approach was cutting costs, the scene’s actually even more comedic this way, Renner said.

“It’s what we call in France ‘System D,’” de Pins explained. “We have to make it happen in many ways without having too much money. It’s interesting; that’s why each movie produced in Europe is different. When you see The Red Turtle, April and the Extraordinary World, Song of the Sea, Long Way North… they’re all different. I think we have no choice but to be creative.”

Reducing the budget through technique

MAD Entertainment has spent much time developing additional tools for commercial cg software to achieve their signature style. Some years ago they decided to switch to the free, open source Blender.

“We found out that the community is very huge and very giving,” Cappiello said. “They were much more wishing to help and to communicate than when we were using paid software.” In turn the studio releases the tools they develop for free, benefitting other independent studios as well.

One of the ways MAD saves on time, and thus budget, is using motion capture. “Alessandro [Rak, one of the directors] would always act scenes out, so we thought, why not do it directly in 3D?” Cappiello said. “This way we compress layout, blocking, storyboarding and directing all in one phase.”

MAD rarely uses the motion capture as-is, but as a rough blocking process, where the animators pick and tweak a selection of key poses, and then manually animate the inbetweens. Walk cycles are made within a few hours this way.

In Zombillenium, many crowds were needed because the film takes place in an entertainment park. Both the film’s producer and the cg artists told de Pins that he had to drastically cut down on crowd scenes, but de Pins insisted on their necessity.

He came up with the solution to draw the crowds in 2D, and put them very very far in the frame, to create the illusion that there are more people on the streets. “It works because the look of the film is very 2D, so we can mix 2D and 3D characters,” he said. “So most of the time when there was a problem, we solved it with 2D.”

It is not unusual for directors of European features to be very hands-on. For a large part of Big Bad Fox, Renner was exporting storyboard images and preparing files for the animators so they had the right number of layers.

Renner enjoyed this kind of control. “I don’t have any experience in studios, but I talked with a lot of directors from the U.S. and they all said the same thing — they’re just a cog in the big machine of a studio. A film is not released by a director; it’s released by a studio.”

MAD Entertainment’s core team has around 15 people. At the time they made The Art of Happiness, none of them had done feature animation before. The learning curve of producing features has been steep, but it’s more or less the only option for the studio.

All crew members making feature-length animation at MAD Entertainment take on several roles in a production — sometimes as many as eight.

“The problem is, if you segment the pipeline, you’ll end up having people go away when they’ve done their job. Instead, we try to form a complete artist,” Cappiello explained. “Maybe not everyone is happy doing everything, but they’re capable of doing it, and they are available to do it if the movie needs it. Keeping films low-budget needs a lot of humanity; you have to build a family where you can live under stress for at least two years.”

“If I had to do it again, I think I’d keep the same studio and the same production,” de Pins reflected. “The chance we had is to have a nice budget — it was not a big budget, but it allowed us to do what we want. And because it’s such a small production, we had a lot of freedom in what to do and what to show.”

At MAD Entertainment, animators choose which shots they felt most comfortable with and the characters they wanted to animate most. There was a lot of freedom for the whole team to participate in the direction. The directors at the studio don’t decide on the ending of a film until the end of the production, and they consult the whole team. “It’s not that the end will change that much,” Cappiello clarified, “but getting to know the characters for such a long time, some of the animators know the characters better than I do as the director.”

For most indie films the producer gathers money from funding bodies, private investors, broadcasters — an uncertain process that can take several years. It’s a difficult decision to throw yourself into a project despite the uncertainties, Renner said, because you never know in which condition you’re going to make the film.

European animated features are occasionally even put on hold during development or production because of budget shortfall. “We’ve been very lucky, but I know a lot of directors who had this problem,” de Pins said. “It’s very difficult because some artists would have to wait [for production to restart], and some of course go to work somewhere else.”

Renner, de Pins, and MAD Entertainment will all be pitching at Cartoon Movie this week. “These ways of meeting are fundamental,” MAD’s Stella said. “I think every appointment is some piece that can help the project.…We also go to ‘standard’ film festivals, like Berlin and Venice, because Cinderella the Cat is a film, you know. It’s not only an animation — it’s a film.”

The Big Bad Fox is already fully funded, but Renner spoke of the value of showing the project at Cartoon Movie. “It’s important to have the film known in the industry, in the circle.”

Many European feature films never recoup on their budget, but that doesn’t seem to be a bottleneck for the industry.

“I think there is more than one way to understand if a movie is successful or not,” said Cappiello. “Firstly, culture is not made to make money.…It can make money too, but it doesn’t always do so, or rather, it doesn’t do so in the right time. There are lots of movies that are considered cult movies and are making money now.”

The field is changing, though, as more opportunities to reach audiences pop up. “Luckily for us there are a lot of ways to distribute the product,” said Stella. “The second life that movies are having will also maybe help the audience to get used to these movies, to get to know them. It’s something you have to invest in several times. It’s not this thing where you put 10 in and get 10 back.”

According to the artists at MAD, what the European film industry needs most right now is the courage to bet on animation. “You need the courage to lose, and sometimes the courage to fail,” Cappiello said. “You cannot always make everyone happy. But you should be at least sure that you’re making the best thing you can make.”

“If we would try to do the same as Pixar, it’d feel a little cheap,” Renner added. “We can’t do a perfect movie — well, we can, but it’s not going to look like a Pixar movie, where you see money on the screen — but you will feel that it works because the director can express a specific idea, and maybe show something we don’t see every day.”