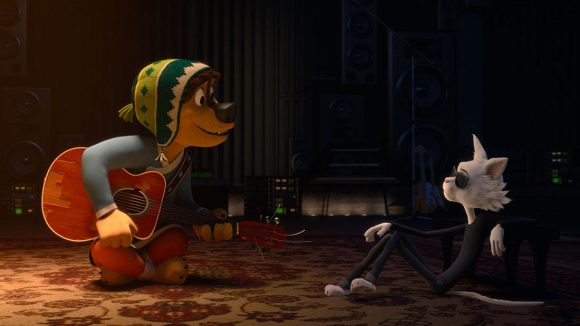 Lionsgate has acquired the Chinese/American co-production Rock Dog for release through its Summit Premiere label. The film will debut in American theaters on February 24, 2017.

Rock Dog is notable for being the most expensive 100% Chinese-financed animated production of all-time, with reports of up to a $60 million production cost. In one of the first examples of reverse-outsourcing in American feature animation, the Chinese backers farmed out the entire production to Dallas-based Reel FX, the company that produced Free Birds and The Book of Life.

Rock Dog was conceived by Chinese rockstar Zheng Jun who wrote and illustrated a popular graphic novel upon which the film is based. The film follows the story of Bodi (Luke Wilson), a Tibetan Mastiff, who dreams of following in the footsteps of Angus Scattergood, a British cat musician.

Directed by Toy Story 2 co-director Ash Brannon, the film was touted as an attempt by Chinese producers to create a culturally-Chinese animated film that would appeal to a worldwide audience. To increase its chances for success in the global marketplace, the film’s original production language was English with a cast that includes J.K. Simmons, Luke Wilson, Eddie Izzard, Matt Dillon, Sam Elliot, Lewis Black, and Kenan Thompson.

See Also: 5 Things You Need To Know About The Chinese/American Feature ‘Rock Dog’

But things haven’t exactly gone according to plan. Chinese distributor Huayi Brothers launched Rock Dog last July in China amidst allegations of corporate sabotage by a rival Chinese film company, which resulted in limited screenings of the film throughout the country.

The film flopped in China grossing US$5.7 million, while the simultaneous launch of the hand-drawn feature Big Fish & Begonia garnered $85 million throughout its run.

In the U.S., Rock Dog will open one week after Warner Bros.’ The LEGO Batman Movie.