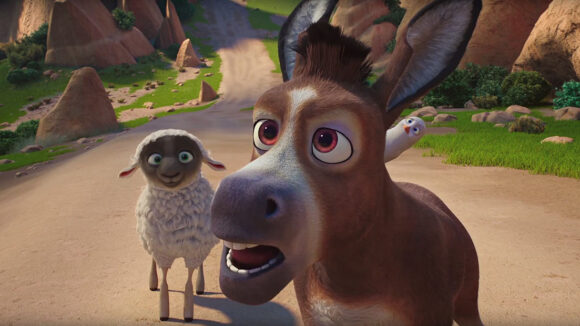 Sony Pictures Animation is pivoting from Poop to Jesus Christ for its next animated feature, The Star, a story about the first Christmas, told from the point of view of the animals.

The Star is the story of a donkey named Bo, who breaks free from the village mill and goes on an adventure with Ruth, a sheep, and Dave, a dove, as they somehow get mixed up in the nativity of Jesus. The studio released a trailer for the film today:

There are a couple significant differences between The Star and Sony’s first two releases of 2017 — Smurfs: The Lost Village and The Emoji Movie. First, the film wasn’t animated by Sony Imageworks, but by Cinesite in Montreal. Second, the film was made for a fraction of the budget on a typical Sony animation production; reports have claimed Star’s budget is $18 million compared to $50-70 million for films like Emoji, Smurfs, and the Hotel Transylvania series.

The smaller budget takes into account that this is a niche film for America’s religious audiences and likely won’t play well (or even open) in many foreign countries. The low-budget religion formula has worked well for Sony in recent years, and the studio has scored hits with films that many in the general public have never heard of, like Miracles from Heaven, Heaven is For Real, and War Room.

The Star marks the feature directorial debut of Timothy Reckart, who earned an Oscar nom for his graduation short Head Over Heels. Reckart directs from a script by Carlos Kotkin (Open Season: Scared Silly, Rio 2) and Simon Moore. The film is executive produced by DeVon Franklin, a former Columbia Pictures executive who also happens to be a Seventh-day Adventist preacher, and the Henson Co.’s Lisa and Brian Henson.

The Star will open in U.S. theaters on November 10.