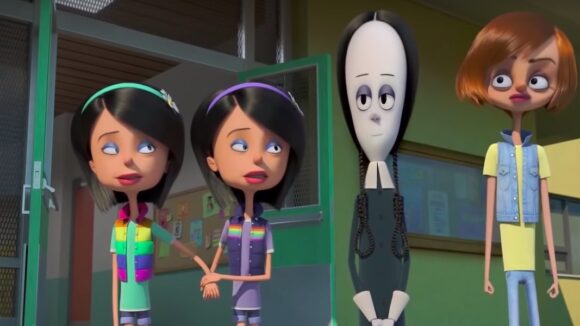 Industry analysts are broadly predicting a domestic opening weekend of $21–$27 million, with Box Office Mojo going as high as $29 million. With these figures, The Addams Family will be vying for second place with Ang Lee’s Gemini Man, starring Will Smith. Joaquin Phoenix vehicle Joker, which is based on the DC Comics character, is expected to stay at the top in its second weekend.

At this rate, The Addams Family is heading for a solid debut. Even at the lower end of its range, it would open ahead of all original animated features released in the U.S. this year — the current record is held by Abominable, which bowed with $20.9 million last month.

But of course, The Addams Family is not an original story. It relocates Charles Addams’s ghoulish characters to the present day, where they are confronted with the new horror that is 21st-century reality tv culture.

The franchise last came to the big screen in the 1990s, with two live-action features. The first opened domestically with $24 million and went on to take $192 million worldwide. The latest adaptation will have to work hard to match that, especially with Disney’s Maleficent: Mistress of Evil poised to take much of its audience when it opens next week.

While MGM is handling North American distribution through its United Artists Releasing banner, Universal Pictures has the overseas rights. The film will be rolled out across dozens of territories between late October and early December.

Vernon, Gail Berman, Alex Schwartz, and Alison O’Brien are producing, with Kevin Miserocchi, Andrew Mittman, and Joe Earley executive producing. Animation was handled by Cinesite’s Vancouver studio — formerly Nitrogen Studios, where Sausage Party was made. The film is produced by MGM in association with Bron Creative, which struck a co-financing deal with MGM earlier this year.

This is the final incarnation of a long-gestating project. The Addams Family was first announced back in 2010, when Tim Burton was set to direct it as a stop-motion feature for Illumination Entertainment. After that collaboration fell through, Vernon was attached to a cg film in 2017, with Tiernan later joining as co-director.

Reviews so far have been poor — at the time of writing, the film has a 34% positive critics’ score on Rotten Tomatoes. Here’s what the reviews say:

The Addams Family is a luscious piece of macabre design. The characters have been computer-drawn so that they’re exceedingly close to the ones in Charles Addams’s original cartoons, and the film is full of keen visual details … [But it] has an overly processed outré harmlessness. It’s so busy treating its famous domesticated ghouls as icons that it forgets to rediscover what’s memorable about them.

Richard Roeper gave two stars out of four in The Chicago Sun-Times:

This time around, [the characters are] mired in a breezy and intermittently funny but not particularly original story that presents some mildly amusing gross-out sight gags in between often wince-inducing, pun-based humor, and the aforementioned heavy-handed message-sending about tolerance and acceptance and learning how to live and let live.

Kate Erbland in Indiewire points out the visual weaknesses in the adaptation of characters into cg:

There are, however, plenty of instances in which The Addams Family relies on unappealing visuals. While the look and feel of the family itself is more in line with the characters that populated Addams’ original comic strips (no sexy Gomez here), the juxtaposition between mostly unflattering character design and the consistently imaginative spaces they get to occupy (from the family mansion itself to its sprawling grounds and even the creepy, Stepford-esque town just empty enough to look foreboding) is jarring. Sure, the Addams family is built to be creepy, but when a bottomless pit offers more visual interest than a family member whose defining characteristic is a large screw through his cranium, something has gone amiss.

But from scene to scene, the film is dominated by blandness — it lacks the texture of the franchises previous live-action adaptations, or even similarly designed animated movies like Corpse Bride. Instead, much of the emotion of the film is lost in the soupy cement of computer animation. You find yourself longing for more moments like the clever one in which Wednesday’s irises shrink into oblivion as she terrifies her brother.

In contrast, Yolanda Machado at The Wrap enjoyed the film:

The surprising element to the animated The Addams Family is that it is a sweet coming-of-age story that tells kids it’s okay to be yourself, even if it means going against your parents’ views … While the script by Todd Lieberman (Sausage Party) is a little too cookie-cutter and a bit simplistic, it works really well for kids. It doesn’t attempt to talk down to them, one of my biggest pet peeves about some family films.