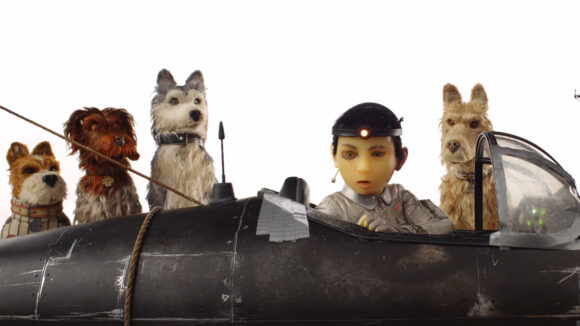 Fox Searchlight has released the trailer for Wes Anderson’s Isle of Dogs, a stop motion feature opening in the U.S. on March 23, 2018.

Little had been known publicly about the project until today’s trailer, which reveals that the film is a dystopian twist on the boy-and-his-dog genre, telling the tale of Atari Kobayashi who is looking for his dog, Spots:

Isle of Dogs tells the story of Atari Kobayashi, 12-year-old ward to corrupt Mayor Kobayashi. When, by Executive Decree, all the canine pets of Megasaki City are exiled to a vast garbage-dump called Trash Island, Atari sets off alone in a miniature Junior-Turbo Prop and flies across the river in search of his bodyguard-dog, Spots. There, with the assistance of a pack of newly-found mongrel friends, he begins an epic journey that will decide the fate and future of the entire Prefecture.

Anderson’s studied visual hallmarks are on display throughout the trailer: balanced compositions, symmetrical and center framing, one-point perspectives. It’s notable simply because it’s so uncommon to see any kind of auteur touch in a mainstream Hollywood animated feature. In the current world of cg features that all look and feel as if they were constructed on the same assembly line and overseen more by manager than artist, the clear evidence of a director’s hand is both refreshing and remarkable.

Next year is shaping up to be a banner year for high-profile stop motion productions. Not only do we have this Anderson project, but Aardman is launching Nick Park’s Early Man in February, and Laika has a mysterious unannounced project currently slated for release in May.

, to be published by Abrams, also looks like worth picking up, though it won’t be released until next March. From the description:

The story of Isle of Dogs’s conception and production unfolds over the course of several in-depth interviews with Wes Anderson, all conducted by film critic Lauren Wilford. Anderson and his collaborators reveal entertaining anecdotes about the making of the film, their sources of inspiration, the ins and outs of stop-motion animation, and many other insights into their moviemaking process. In keeping with Anderson’s signature aesthetic vision, The Wes Anderson Collection: Isle of Dogs is richly designed and rife with colorful behind-the-scenes images, photographs, concept artwork, and ephemera.