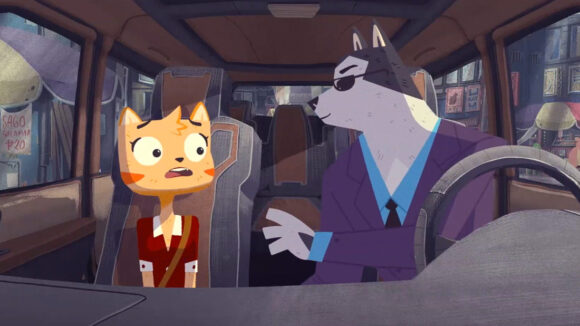 Philippines-based studio Rocketsheep has posted a new trailer for its upcoming adult romantic-comedy You Son Of A Bitch (Hayop Ka!). Rocketsheep Studio founder Avid Liongoren directs the film, which is currently aiming for a theatrical release in mid-2020.

While the film’s colorful hand-drawn style may suggest a kid-friendly title, the trailer below (not to mention film title) tell a more mature tale:

Nimfa the pretty pussycat is a perfume sales kitty at a department store. Her boyfriend, Roger the macho mongrel, is a janitor. Nimfa meets Inigo the bourgeois business dog & chemistry ignites! Will Nimfa & Roger’s love keep them together, or will Inigo’s high society charms tear them apart?

The filmwill be distributed in the Philippines by Spring Films, a company headed by actor Piolo Pascual. The young distributor has mostly handled Filipino romantic comedies to date, and You Son of a Bitch marks Spring Films’s first venture into animation.

A cast of Filipino celebrities have been lined up to provide the voices, headlined by Angelica Panganiban (Nimfa), Robin Padilla (Roger), and Sam Milby (Inigo), with supporting performances by Empoy Marquez and Arci Muñoz.

The independently produced film is largely self-financed by Rocketsheep, using proceeds from the studio’s earlier hybrid feature Saving Sally, which was released in 2016.

Plans for international distribution of You Son of a Bitch have not been finalized at this time.