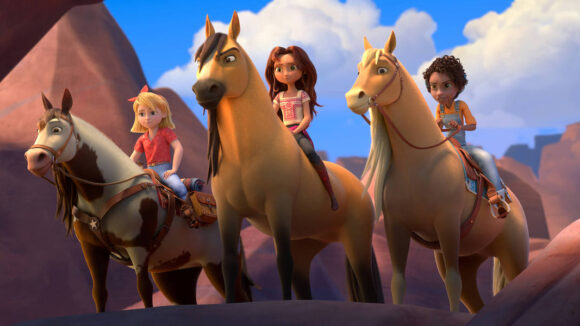 The first commercial has dropped for Dreamworks’ Spirit Untamed, a feature based on the studio’s cg-animated series Spirit Riding Free, which is coming to the big screen this summer. No teaser or trailer has been released, so this spot provides our clearest look at the film’s animation.

The film continues the story of the show, which debuted on Netflix in 2017 and has run to eight seasons so far. The Emmy-winning series and its subsequent specials, webisodes, and Spirit Untamed are all loosely based on the 2002 Oscar-nominated 2d animated feature Spirit: Stallion of the Cimarron.

Watch the spot below:

In 2019, Deadline reported that the film would be produced with an outside vendor to cut costs. Dreamworks followed a similar model for its 2017 feature Captain Underpants: The First Epic Movie, which had a production cost of $38 million. For comparison, other Dreamworks animated features released around the same time had budgets upwards of $125 million. The studio has not confirmed which approach it has taken on Spirit Untamed.

The voice cast from the series has been replaced by a star-studded list of celebrities, a common practice with series adapted for the big screen. Isabela Merced voices Lucky, with Jake Gyllenhaal and Julianne Moore voicing her father and aunt respectively. The teaser features Taylor Swift’s re-recording of her 2015 song “Wildest Dreams.”

The film is directed by Elaine Bogan (Trollhunters: Tales of Arcadia, 3 Below: Tales of Arcadia, Dragons: Race to the Edge) and co-directed by Ennio Torresan (head of story, The Boss Baby). Karen Foster, who has produced several shorts at Dreamworks and co-produced the original 2010 How to Train Your Dragon film, is producing. The film is written by Aury Wallington, the creator and executive producer of Spirit Riding Free.

Universal is due to release Spirit Untamed theatrically in the U.S. on June 4.