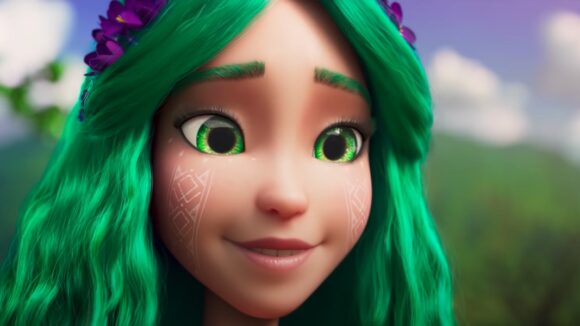 Almost four years after we covered its first teaser, Mavka, The Forest Song, a Ukrainian film about a mythological woodland nymph, is back on our radar. A new trailer has launched for the cg feature, which is due to premiere theatrically in 2022.

The new trailer strikes a pretty different tone from the old one. We’re once again in a pastoral setting, but the ecological message is now more pronounced. Mavka, who has been redesigned, gets to show off her chops as the “guardian of nature,” harnessing the energy of a herd of stampeding bison. The romantic storyline hinted at last time is now more explicit, too.

Mavka, The Forest Song echoes the canon of eco-aware animation: Studio Ghibli, Cartoon Saloon, etc. The producers have partnered with WWF to spread a conservationist message. But the film also draws on Ukrainian literature and mythology. The source material is Lesya Ukrainka’s classic play The Forest Song, and folk instruments are woven into the score.

The film is directed by Oleksandra Ruban and Oleg Malamuzh, and the production studio is the Kiev-based Animagrad, whose stated mission is to “[bring] Ukrainian animation into a new age of excellence.” Founded in 2012 as a division of Film.UA Group, Animagrad has released one feature to date: 2018’s The Stolen Princess. The film grossed $6.5 million globally, according to Box Office Mojo. It played across Europe and Latin America as well as in China, where it was the first ever Ukrainian release. It wasn’t picked up for U.S. distribution.

Mavka, The Forest Song was presented at the European co-production platform Cartoon Movie and Annecy’s MIFA market in 2017. The film has been pre-sold to 20 territories in Europe, the Middle East, and North Africa. Animagrad is at work on several other projects, including the feature Roxelana, which the studio’s website currently has down for a 2022 release.