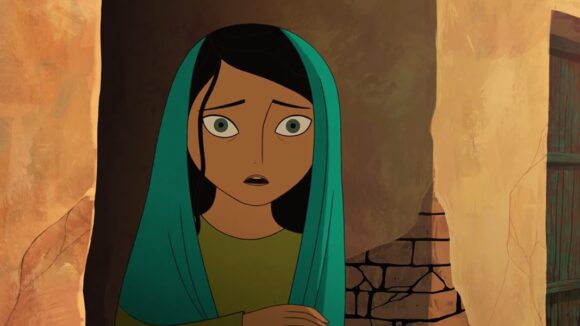 The name of the Animation is Film festival is a statement of purpose, as well as fact. As awards season progresses, that statement is likely to be supported by nominations and wins — including perhaps an Oscar.

The first win came shortly after the conclusion of the inaugural Hollywood-based festival, co-sponsored by Cartoon Brew, in the form of a grand jury prize for The Breadwinner, director Nora Twomey’s powerfully moving adaptation of Deborah Ellis’ novel about a young Afghan girl masquerading as a boy to survive the reactionary reign of the Taliban.

Making its U.S. premiere ahead of a November 17 theatrical bid for Oscar qualification, The Breadwinner also swept the Animation is Film festival’s audience award, an honor influenced by the attendance of co-executive producer Angelina Jolie, who spoke both to a sizable press contingent and premiere audience of the topicality and universality of the film’s exploration of perpetual war and gender politics.

“The care and commitment that the crew and production have put into this film, determined to make it so authentic, is something I’m sure you will see and very much appreciate,” Jolie told the sold-out audience. “This film asks us to put our imagination, and ourselves, in another person’s shoes, in this case the shoes of an 11-year-old Afghan girl. It puts our own lives and issues into context when we consider what little girls in Afghanistan have been up against. There are few countries in the world where it is harder to be a young girl, where barriers between girls and their dreams — and their rights — are so high, and so painful to experience and observe.”

“I think and hope that we can all see ourselves in this film, because it is about humanity, and love of family,” Jolie continued, highlighting the The Breadwinner’s universal promise, as well as the turbulent nation (still) hosting the longest war in American history. “It’s not just an Afghan story; it is a story of our times, and a story of a world in which equal rights for women remains a central, burning issue. I hope it will also remind you, as it does me, why we cannot abandon a country and people who have suffered so much, and whom we have promised so much.”

The Breadwinner’s selection and opening night slot, as well as its promotional rollout for the Oscars, are understandable: Animation is Film is co-presented by GKIDS, The Breadwinner’s co-producer. But days later, Twomey was also awarded another inaugural honor: She became the first woman in animation to win a diversity award from the organization Women in Animation. It will probably not be last recognition that the Cartoon Saloon co-founder, creative director, and co-director of the Oscar-nominated The Secret of Kells gets before the Academy Awards machine truly kicks in.

But while the merits of an Oscar, or any award, are debatable, what isn’t debatable is the industry exposure and legitimacy that the Academy Awards can, and likely will, bring to animation — all of which will institutionalize the Animation Is Film festival’s main thesis.

“Seeing animation being encouraged like this is incredible,” Twomey told Cartoon Brew on the last day of the fest, which screened 11 other new animated standouts expressing the art form’s dizzying spectrum. “There is a market for this; people are hungry for films that tell different stories.”

“I’ve probably gone through my whole life trying to fight against animation as genre,” she laughed. “And I’ve had people tell me they forget that The Breadwinner is animation, as though it’s an insult to call it animation. I remember being in the back of a taxicab telling the driver about The Breadwinner and he said, ‘Why don’t you make it a real film?’”

Added Saara Chaudry, the 13-year-old actor and voice of the film’s brave female lead, Parvana: “There is an assumption that it’s supposed to be a live-action film, which is what I am often asked when I tell people what The Breadwinner is about. But animation isn’t supposed to be anything; you can take it in whatever direction you want. When people finally watch The Breadwinner, then they often understand why it is an animated film. It’s fantastic that we have such an incredible movie, based on an incredible book, in a festival that celebrates the choice to use animation.”

To make such a choice is to be constrained only by the imagination, explained GKIDS founder Eric Beckman, before introducing Jolie to the packed audience at The Breadwinner’s festival opener. One mission of the festival is “to challenge audiences to take their blinders off and think a lot more broadly about what animation can be,” he said.

And while Animation is Film kicked its Friday off with only the industry appeal of The Breadwinner and the North American premiere of director Nobuyuki Takeuchi’s Fireworks, the following two days exploded animation’s borders with underground experiments (Birdboy: The Forgotten Children, Virus Tropical), accessible all-ages pleasers (The Big Bad Fox and Other Tales, which took home a special jury prize), astounding anime (Masaaki Yuasa’s kinetic wonders, Lu Over the Wall and Night is Short, Walk On Girl), and more.

“I think the United States needs a festival with quality [feature] animation like this, so I hope it will grow over the years to become an influence” Alberto Vazquez, Spanish co-director of Birdboy’s dystopian psychedelia, told Cartoon Brew before its west coast premiere.

“It’s very important for us to have the opportunity for people in North America to see movies that perhaps have a more difficult chance to be seen,” added the film’s co-director Pedro Rivero. “We don’t especially like cgi or 3d films, although sometimes you can see some very nice movies which use that technique. But we don’t think that quality depends upon technique; it depends upon the story. In some cases, it is very difficult to have the same impact as a live-action movie, but we feel animation is able to explore ideas that are impossible to describe in other films.”

“Over here, you use the word a lot: industry,” Santiago Caicedo, Colombian director of Virus Tropical, adapted from Colombian-Ecuadorian artist Power Paola’s graphic novel of the same name, told Cartoon Brew after their the handmade coming-of-age memoir’s world premiere. “Are you in the industry? Do you work in the industry? So to make films in Hollywood involves an industrial process, and if you are outside that model, that way of working, then you’re out of the industry and unable to do much of anything. I think the French and Japanese have more of a tradition of craft when it comes to animation, while the U.S. is more related to industry.”

Paola and Caicedo were concerned, they told me, about Virus Tropical, which was made by seven people, being taken seriously as animation. Given its many technical issues “that we were able to resolve in a very artistic manner,” he explained, “we were always afraid that Virus Tropical wouldn’t be seen as a real animated film.”

“To be next to this festival’s films made us feel really comfortable and relieved,” Caicedo added. “On the other hand Virus Tropical is an out-of-the-box, alternative, and independent film with a fresh point of view, which is important for people who make animation to see. Because it is so different, it’s a statement, in a way, which says that we can all tell our stories without the preconception of how animation should be made.”

That unlimited promise is what primarily separates animated film from live-action film proper — which, of course, is more and more populated with computer-generated imagery than ever. Despite animation’s current ubiquity, as well as its extensive history, it still remains a statement to argue that animation is film, with a capital F, seventeen years into the 21st century.

But from the (hopefully annual) Animation is Film festival’s inauguration to the incoming Oscar buzz for The Breadwinner — which should intensify as the female-led film, with Jolie up front, adds to the mounting charge against an American political and entertainment establishment polluted by toxic males receiving a belated comeuppance — it is thankfully becoming less unusual to consider, and consume, animation as cinema on par with the pantheon.

“Animation is everything from Mickey Mouse to Planet of the Apes,” said Twomey. “It’s all about how you define it.”