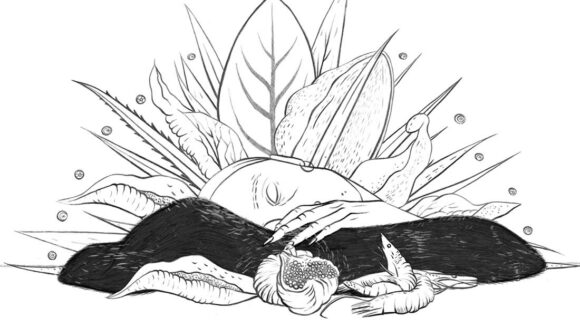 The 71st Cannes Film Festival has announced their official shorts selection, which divides into two categories: short films in competition and the Cinéfondation Selection.

The 2018 edition of the festival received 3,943 short films for its main shorts competition, and selected just eight films. Among those, only one was animated – Marta Pajek’s III from Poland. The 12-minute short (concept art at top) is the third part of her triptych, Impossible Figures and Other Stories.

The first part of Pajek’s triptych – which was actually numbered part II – is a film that I enjoyed greatly so I’m looking forward to her latest. A trailer isn’t online yet, but the new film is described as “a portrait of a woman staying in an uneasy and exhausting relationship with a man, which allures her and repulses her at the same time.”

The Cinéfondation Selection, which is for student films, chose 17 films for competition from 2,426 submissions. The following three films in that group are animated:

Both shorts juries are presided this year by French filmmaker Bertrand Bonello. The Cinéfondation prizes will be handed out on May 17, followed by the Short Film Palme d’or on May 19.

For those who can’t make it to Cannes, three of the four films will also be screening in competition at Annecy the following month: III, Inny, and Inanimate.