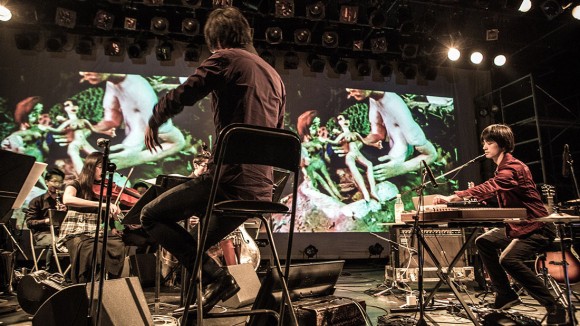 I recently attended the Georama festival in Tokyo, as an invited guest along with Caleb Wood, Don Hertzfeldt, and Bruce Bickford. Myself excluded, it was a brilliant mix of people who I was honored to be around. Georama is a small festival in its second year, with a focus on bringing attention to indie animation to Japan, organized by Nobuaki Doi with Foghorn head honcho Chihiro Tanikawa.

Nobuaki, or Nobu as he is known, has been a constant presence at animation festivals across the world – often the only Japanese presence at these events. Nobu is a fascinating character – he was studying Russian literature and his life changed when a teacher showed him Yuri Norstein’s animated films. Ten years later, he has become Japan’s main authority on – and ambassador for – international animation. He is one of the rare curators who will actually read festival catalogs and attend every single screening at an event, tirelessly searching through the many fringes of the animation world. I haven’t met anyone with such an encyclopedic knowledge of the contemporary animation scene.

His influence extends far beyond this event, and he has helped cultivate a local underground animation scene in Japan which is growing every year. Some of you may also know him as the director of the eccentric New Chitose Airport International Animation Festival, which is the world’s only animation festival to take place entirely in an airport. He recently founded the company New Deer to localize and distribute short and feature films in Japan, and Georama is the festival extension of this. As I am a fan of everything Nobu does, I was glad to be asked to design the logo and mascot for this festival.

It’s important to stress that indie animation as it’s known in film festivals and online is not particularly popular in Japan. Getting the Japanese interested in these works is a tough sell–there’s no shortage of animated content here, and anime’s popularity has created fixed ideas of the medium and what it’s used for. Equally, when you already have people like Hayao Miyazaki, Hideaki Anno, and Masaaki Yuasa pumping out great stuff, it’s hard to create space for these more modest, but sometimes more personal, work. This is what Nobu and Georama set out to address: to find an audience for these works as has been found in Europe, the United States, South America, and beyond. The festival is trying to create interest rather than capitalize on it.

This year, the festival had no competition screenings, and instead focused on events and performances. As a filmmaker, this was great. Award ceremonies are my least favorite thing; even the good ones are worse than sitting blindfolded for several eternities in hell. The events in this case took place across the city, and varied from screenings, live scoring, gallery shows, Q.&A.s, lectures, and music events, among other things. American independent filmmaker Caleb Wood was creating live animation in several locations. In case you don’t know, Caleb is the hottest and most handsome young animator in the world right now. Check out his work immediately.

The scale of Georama is such that everyone can meet and hang out without the usual barriers of large festivals with tiered badges and business people haunting the place. It’s a great festival for artists to meet other artists, and there’s a good collection of students, volunteers, and local and foreign filmmakers. Despite its intimate scale, the curatorial spectrum of the festival is very broad, from Bruce Bickford’s purely analog work to Caleb’s eclectic approach. Don Hertzfeldt and I did a talk together titled “How You Get There”–which was a fun thing for us and hopefully the audience. I don’t think either of us know what “there” is, but if there’s any measure I might use, it would be having done that event together.

Of course, Bickford is a legend in the animation world. He’s quite possibly the reason the phrase “face melting” exists. The festival set up an array of different events to present him and his work. These were all designed to bring in a new audience of people and it was so much more engaging than putting on normal screenings, especially as the craft aspect of his work is so interesting by itself. The event which closed them all, “Channeling with Mr. Bickford,” was totally spectacular. Curated by Naohiro Ukawa of Dommune, the show brought almost 1,000 people together, packed into a small room, watching completely different interpretations of his work by brilliant musicians like Eye (Boredoms) and Shugo Tokumaru. This was a really beautiful moment; I haven’t seen anything like it, even at the largest animation festivals.

Georama is a different animation festival in many ways. Its target audience is completely local; it’s not one to visit without understanding Japanese, and there is no fixed location. Rather, it inhabits many places at once, and it survives in large part due to strong ticket sales.

It’s perhaps the seed of something much larger and more international, but I think its strength and uniqueness is in its focus on creating moments and interactive events, particularly as the normal pattern of creating a festival around screenings is going to soon become redundant, as more and more shorts are being released online.

Georama promotes the idea of independent animation as much as the artists behind it, and so its fruit might take years to grow. I certainly hope it succeeds.