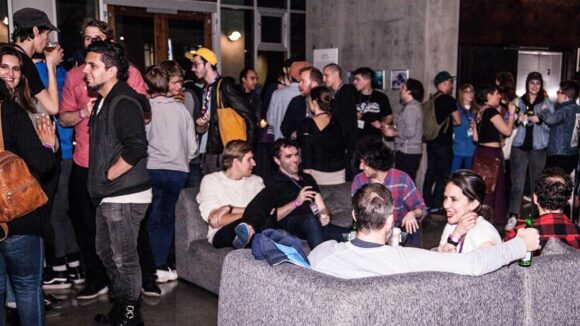 The second annual GLAS Animation Festival ran from March 2-5, 2017 in Berkeley, California. Still a newcomer to the festival scene, this year’s success affirmed it will be the up-and-coming festival to watch (and attend) in years to come.

There has always been a notable lack of animation festivals in the United States compared to the now-thriving festival culture in Europe. Back in 1960, a group of animators wanting access to creative stimulation through watching films and meeting filmmakers convened in an out-of-the-way French Alpine town called Annecy and made those desires reality, establishing the longest standing animation festival in the world.

In a similar vein, after four days of attending the GLAS, I felt a wellspring of hope rising; it seems like a venue of professional camaraderie and cross-pollination has finally arrived for the United States. For U.S. animators not wanting to travel abroad to meet and be inspired, GLAS is your new annual trip. For animators abroad that want to show films and network in the U.S., but are baffled by the festival scene here – put next year’s submission deadline on your calendar.

GLAS is first and foremost an animator’s festival, co-founded by animators Jeanette Bonds and Einar Baldvin. One of the lead programmers is Sean Buckelew and the festival board and advisory committee is made up of a good mix of indie animators, industry talent, and academics, almost all of them practicing filmmakers.

The artistic flavor of GLAS leans towards the edgy and independent, and it boasts the cozy atmosphere of a small European festival. Here’s a look at three of the essential ingredients that, in my opinion, made GLAS a success this year.

The GLAS selection is competitive. They received over 1,300 entries, according to festival director Jeanette Bonds, who watched EVERY submission from start to finish before passing on qualifying films to the selection committees. Using a combination of mathematical and intuitive selection matrixes, (including giving each selector one “hissy-fit film” to include no matter what), the committees and programmers eventually selected 54 films for competition and 16 for the international showcase

“We tend to savor films that have a strong independent vision,” Bonds said of the festival’s curatorial sensibilities. “Not necessarily the most beautiful produced films, but those films that make you feel something and engage while you are watching it, films in which the voice of the director is clear and transforms the cinematic landscape of animation.”

When I received my handy little festival program and flipped through the schedule, I immediately realized that I would not be able to see everything over the four days and had the familiar task of puzzling together a program for myself of competition and special screenings that would educate and entertain me while still leaving a bit of time to sample Berkeley’s gourmet ghetto (see point #3).

With such a breadth of entries and a professional selection process, the competition screenings offered variety in technique, subject matter, and competitive level. There were prize categories for undergraduate student film, graduate student films, family film, commissioned work, narrative, and non-narrative, best U.S. short, an audience award, and a grand prize. Each of the five competition screenings drew from all of these categories so you got a bit of everything within the 80-minute programs. A list of the winning films can be found at the end of this piece.

There was also a healthy amount of special programming, mostly centered around retrospectives and curation by the jury members and other special guests of the festival. I found the hour of Georges Schwizgebel’s painted animation delightfully dizzying, the hour of Amy Lockhart’s absurdist endeavors completely baffling.

Watching the full filmography of Mathieu Labaye revealed a creative trajectory that pushes far beyond his technical mastery of complex human movement, encompassing the psychological gymnastics of humanity in a world where health and justice do not always play fair. The screening of Maasaki Yuasa’s 2004 classic Mind Game was a wild trip into a psychedelic side of anime I had never considered enjoying. The best part of these special screenings was that all the directors were there for a Q&A afterwards and the engaged audience of animators and the general public always had questions.

Other festival events included an ar/vr showcase by Ghosting TV, a portfolio review and career development workshop by Niceklodeon, and a well-attended drawing workshop with Pixar artists Ana Ramirez and Madeline Sharafian in which we actually used real paint and paper.

Also proof that Pixar still draws a crowd was the packed-to-capacity conversation with Brad Bird (The Incredibles, Ratatouille), who entertained us with stories of production, encouraged us with stories of his early years in development on dead-end projects, and left us with a discussion point by saying he would rather see an animation student graduate with 30 seconds of polished, nuanced animation performance done as a pencil test, rather than the hastily colored, marginally animated, three-minute short films that many students produce nowadays as their graduation film. As an animation educator, I have my own opinions on the “one student, one film” model, and was eager to discuss them with others at the reception that followed. Which brings me to my next ingredient.

2. Good People (and ways to meet them)

After the day’s selection of screenings (and sometimes in lieu of them), animators congregated in the Hotel Shattuck Plaza and the David Brower Center for parties and the other nerdy things animators do when they socialize, like doodling on chalk tables and competing in Cintiq draw-offs.

All passholders were invited to the parties so festival guests, filmmakers in competition, students, and animation fans were able to rub shoulders at the grass-fed burger buffet and eventually find new friends through discussing the day’s films with a sponsored drink in hand.

Generous sponsors are the key to this part of a festival, and here there was no lack either. The festival attracted both local and industry funding partners, including Cartoon Network, Nickelodeon, Giphy, Wacom, and many more contributors with both budgetary and in-kind donations. (This website Cartoon Brew was also a major sponsor of the event.)

In attendance were several international animators, many brought in as special guests or jury members. The Consulate General of Switzerland in San Francisco sponsored Georges Schwizgebel’s retrospective and the Japanese Foundation brought Maasaki Yuasa to the festival.

Between 30 and 50 filmmakers with films in the festival attended, and every competition screening and most of the retrospectives and special screenings had Q&A sessions with filmmakers, making it easy to put a face to a name in the credits and find that person afterwards at a party or in the lobby to ask some follow-up questions. Not only that but an estimated fifty percent of the general festival audience were filmmakers, regardless of whether they had a film in competition. So there was quite a lot of shop to be talked.

Now I am a bit biased because I grew up in the Bay Area, but I can’t think of a better West Coast location for an animation festival than Berkeley, California. Nestled in the heart of the San Francisco Bay Area, the festival is close enough to Los Angeles to draw a significant crowd, but far enough removed to avoid the overshadowing of “the industry.”

Easy access to Berkeley via the Bay Area’s BART trains made air travel entirely convenient for those farther afield and local festivalgoers didn’t have to deal with parking in the busy downtown. I actually rode my bike every day from the outskirts of town, making use of some well-marked bike lanes in eco-friendly Berkeley. Not entirely Euro-style, but a good deal closer than you get most places in the US.

The venues were all within a few blocks and the California spring weather made for easy walking. In the Shattuck Cinemas complex, one large theater was set aside exclusively for festival screenings as well as one small cozy theater with couches instead of seats. The Hotel Shattuck Plaza, where most out-of-town guests were staying, was right around the corner.

Being close to the UC Berkeley campus meant that there were ample places to find good, inexpensive food from just about every ethnic tradition and combination thereof. A few blocks north of the festival venues is Berkeley’s “Gourmet Ghetto,” home to some world renowned established venues like Alice Water’s Chez Panisse and the original Peet’s Coffee & Tea.

For those travelling to the festival, a trip to the Bay Area might mean tacking on an extra few days to visit that friend who works at Pixar and that student who landed a job at ILM. Business aside, just being a tourist in San Francisco or finally taking that California roadtrip on your bucket list makes the location even more enticing. Springtime in California might be the best place in the whole world.

See you there next year…

After things quieted down, I spoke at length with Jeanette about the inner workings of the festival and their plans for the future.

While not all can be revealed in this article, I can confidently say that the GLAS team is working with the long view in mind. This is a festival that is meant to last and making it through a successful second year opens up many more opportunities. “The first year, I was thinking, ‘Oh my god, can we make this happen?,’ and this year all I could think was, ‘I hope this is good,’ Bonds told me. “Now we’re ready to kick up the gears a notch and increase the production value in several ways, both the back end and in the festival experience itself.”

The GLAS Animation Festival offers an alternative view of the U.S. animation scene, one that is both contrarian and complementary to the mainstream. It has all the things a successful festival needs: great films, great people, and great parties. Submissions (which will be completely free) open in June.

Next year’s festival will be in mid-March. I’ll see you there.