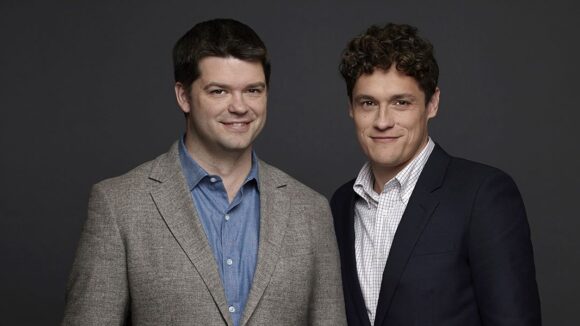 In just two short years, the GLAS Animation Festival has become a must-attend animation event on the American animation calendar, combining world-class guests from both the independent and industry universes with superbly curated and eclectic programming.

The third edition is set to take place on March 22-25 in Berkeley, California, and the festival is announcing its first slate of special guests today.

The headliners at the upcoming edition would undoubtedly have to be Phil Lord and Chris Miller (pictured above), the duo behind The Lego Movie, Cloudy with a Chance of Meatballs, 21 Jump Street, and the upcoming Spider-Man: Into the Spider-Verse, as well as small-screen endeavors like Clone High and The Last Man on Earth.

Lord and Miller are joined by an incredible group of independent filmmakers, interactive content creators, and visual artists from around the globe. Learn more about them below:

David OReilly (b. Ireland, 1985) is an artist working in the fields of design, animation and video games. Creator of the groundbreaking animated films Please Say Something and The External World, his film work has won numerous awards and been the subject of several retrospectives internationally. He has served as writer for the TV shows Adventure Time & South Park, and created the fictional video games in Spike Jonze’s Academy Award winning film Her. In 2014 he released his first independent game Mountain and followed up with Everything in 2017. Everything won top prizes at A Maze & Ars Electronica and was featured as Game Of The Year by Wired, Polygon, AV Club and others. Its trailer became the first ever interactive project to qualify for an Academy Award.

Réka Bucsi, born in 1988, is a hungarian independent animation filmmaker. She received her BFA and MFA at the animation department of Moholy­- Nagy University of Art and Design Budapest. Her films were screened at official shorts competition Berlinale, SXSW, Sundance, Annecy, her graduation film Symphony no. 42, got shortlisted for the 87th Academy Awards. She was an artists in residence at the Open Workshop in Viborg – Denmark, and at Q21 in Vienna – Austria. Her short film Love was nominated for the European Film Awards 2017. Réka is represented as a director by Passion Pictures.

Michael Frei is an artist currently based in Zürich, Switzerland. His films Not About Us and Plug & Play received numerous awards all over the world. He was invited «Animation Artist in Residence Tokyo» in 2014. In 2015 he completed his first game «Plug & Play». He is now working on his upcoming project Kids. Michael Frei will show his animated films and present some of his more recent projects such as the upcoming Kids. He will talk about how he found himself making games.

Jonathan Hodgson is an independent animator based in London. He studied at Liverpool Polytechnic and the Royal College of Art. His short films have won many international awards including a BAFTA for The Man with the Beautiful Eyes. He has worked on numerous advertising campaigns, music videos, features and documentaries including the groundbreaking drama-documentary-animation hybrid The Age of Stupid and Wonderland: The Trouble with Love and Sex, the first full-length animated documentary on British tv. He has lectured extensively in the UK and abroad and since 2008 has been course leader of the Animation degree at Middlesex University. He continues to combine teaching with animated filmmaking.

Ruth Lingford was born in London in 1953. After working as an Occupational Therapist in the fields of Psychiatry and Geriatrics, and having two children, she did an undergraduate course in Fine Art and Art History at Middlesex University and a Masters in Animation at the Royal College of Art. She has worked on documentaries and music videos and has made several short films. She taught at the Royal College of Art and the National Film and Television School and since 2005 has taught Animation in Harvard’s Visual and Environmental Studies Dept. She lives in Boston and London.

Born in 1987 in Lannemezan (Hautes Pyrénées), Boris Labbé lives and works between France and Spain (Madrid). After obtaining his DNAP (National Diploma in Visual Arts) at the School of Art and Ceramics in Tarbes, he continues his studies at the EMCA of Angoulême. There he produced numerous projects, including Kyrielle, which was awarded the Special Jury’s prize for Graduation Films at the Annecy International Animated Film Festival in 2012. Simultaneously, he developed his work as an artist and film director, and spent one year as artist member at the Casa de Velázquez in Madrid, academy of France in Spain. Afterwards, he began to collaborate with Sacrebleu Productions and directed the short films Rhizome (2015) and the upcoming project La Chute (2018).

Rachel Sale is an illustrator and aspiring filmmaker with a particular interest in telling stories that deal with the complexity of the modern world and its people. After 5 years of working in illustration and the elusive ‘scribing’ industry, she decided to go back to art school and will soon complete her MA in Visual Communication at the Royal College of Art. Rachel’s practice is ever evolving and she chooses not to stick to one particular style, but rather to select a considered stylistic approach to each of the projects she’s involved in. Having said this, there are consistent elements to her work; an underlying sense of optimism and good humor are ever present.

Originally from Bath, Sophie went on to study at the Royal College of Art and had international success with her graduation film ‘Half Wet’. Since then she has lectured at festivals and universities around the world and has settled in her London studio. From here she and directs and produces content for clients like Google, MTV, Air Bnb, Lena Dunham, and Harvard University. She also writes songs and creates the animated visuals for the musical freak John Daker. Currently Sophie is working on 2 new films to be released in 2018 and venturing into ceramics where she can bring her characters into the third dimension.

Signals is a collaborative project by artists Nicolas Sassoon (Vancouver, BC) and Rick Silva (Eugene, OR). Sassoon and Silva share a broad and persistent theme in their practice – the depiction and alteration of natural forms through computer technology. Rooted in this common interest, and produced by pairing complementary fields of research in computer imaging, Signals focuses primarily on immersive audio-visual renderings of seascape environments. The project draws from scientific oceanic surveys, virtual reality and natural phenomena to generate video works, prints, sculptures and installations that reflect on environmental inquiries, concepts of monumentality, and alteration.

John Daker is the musical child of 4 IRL intimate associates: Frontwomen Sophie Koko Gate and Rachel Sale, backed by their m9s from Skillbard. An Arse Pop Love Band, 2 chicks sing about other chicks with the help of an unsavory pixelated band member. Order yourself a large white wine, tuck in that tie and prepare to watch 4 of the softest attitudes in show business. John Daker will sing from their new EP Dubai Was Liiiiiit released on Nat Rale records ltd.

Festival passes are currently available to buy on the festival website. The festival will soon announce more details about its official selection, workshops, installations, and special programming events.