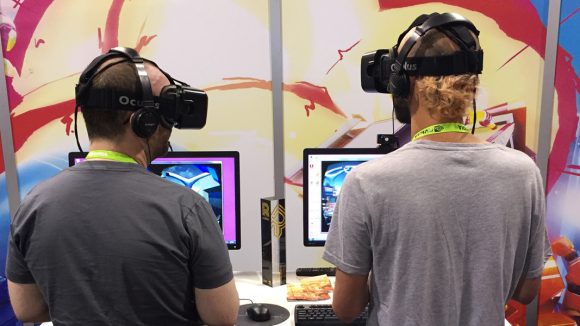 For years one of the highlights at the SIGGRAPH Conference on Computer Graphics and Interactive Techniques has always been the Computer Animation Festival. The Festival is a platform for the best in cg animated shorts, vfx breakdowns, commercials, and effects simulations.

This content has traditionally been shown at the conference like any other media: projected on a large screen to a collective audience. The problem is, traditional ways of making and therefore viewing content have changed, or are changing, especially in the realm of virtual reality. Even then, watching vr content can be limited by having access to the necessary headsets, a challenge at a large event like SIGGRAPH.

But first, a quick recap on the Computer Animation Festival. Although it’s had several incarnations over the years, the festival has always been one of the premiere events to submit computer graphics-related digital film and video creations. The content shown at SIGGRAPH was perhaps originally more technical in nature but soon morphed into breakthrough shorts from studios like Pixar and PDI. The digital vfx and cgi explosion of the early 1990s also saw many visual effects studios enter demo reels and their work on particular film sequences into the Computer Animation Festival.

In fact, that’s an important point to note about the Festival. It’s jury-reviewed, which means submissions are considered by a panel and prizes are presented (these prizes, too, have ranged in nature but generally include best in show, jury’s choice, best student project, and a range of other categories). And since 1999, the Academy of Motion Picture Arts and Sciences has recognized the Computer Animation Festival as a qualifying festival for the best animated short film Oscar.

But, as noted, digital storytelling is changing. For example, Patrick Osborne’s animated short Pearl received significant attention when it was released as a 360 degree interactive video (A non-interactive and non-360 theatrical version of the short received an Oscar nomination this year). Last year at SIGGRAPH 2016, Pearl was presented on as part of a ‘production session’ at the conference.

The advent of more and more vr and 360 degree films like Pearl, and similar immersive content, spurred the Computer Animation Festival committee to devise the VR Theater at this year’s conference in Los Angeles. What does that actually mean? Well, in the same way that the Electronic Theater will be the home for passive, linear narratives at the Computer Animation Festival, the new VR Theater will be the place to watch immersive and interactive stories.

Watching these vr stories together is a key feature of the new VR Theater, since oftentimes the usual process of watching a vr experience is to stand in line to don a headset. Instead, says Jeremias, “the VR Theater will be a physical space that attendees will have access to. The space will have individual headsets for every attendee in the room. All attendees that access the VR Theater will be able to enjoy a selection of vr storytelling pieces that explore the medium’s unique style.”

Wait, isn’t there already a vr component of SIGGRAPH? There absolutely is. Indeed, there’s more than one place to check out vr experiences. VR presentations have been available at the Emerging Technologies and in the VR Village in past SIGGRAPH conferences. “Emerging Technologies focuses on hardware innovations, VR Village focuses on installations, and the Computer Animation Festival’s VR Theater will focus on the storytelling experience,” clarified Jeremias.

Submissions for the Computer Animation Festival are due by March 21st. Jeremias advises that the jurors are looking for “high quality submissions, breakthrough achievements, great stories, and innovative storytelling.” These submissions can be in two paths, as outlined on the SIGGRAPH website:

It’s great to see SIGGRAPH continuing to adapt to a changing landscape in the computer graphics world (the conference has over the past few years also been tweaking the way it showcases innovations in real-time animation, interaction and rendering, for example). VR is certainly a technology artists are interested in producing for, while adoption seems still in its early days. Having a way to see, and perhaps feel, more vr content, should help the medium.

SIGGRAPH 2017 takes place in Los Angeles on 30 July – 3 August. Find out more about submitting to the Computer Animation Festival here.