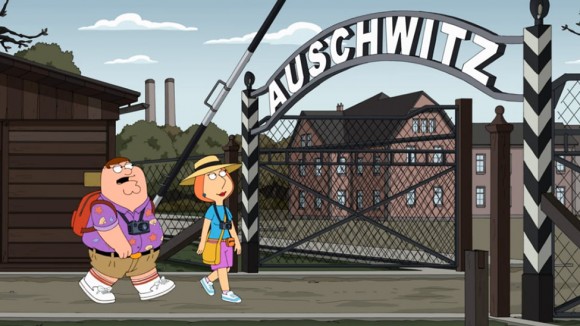 All of those statements are false, with no basis in historical fact, but that hasn’t stopped contemporary Hollywood from trying to rewrite history and convince today’s kids that Walt Disney was some kind of villain.

Last night this classic Cartoon Brew post — “Why Kids Today Think Disney was a Jew-Hating, Hitler-Loving Racist” — started receiving a lot of new traffic, and it took me a second to figure out why: Family Guy did another “joke” aimed at tarnishing Disney’s reputation. This time Seth MacFarlane’s show took it one step further, not only calling Disney a Nazi supporter, but suggesting that the trains that run around Disneyland are actually Holocaust trains designed to kill Jews. Watch it below:

Another lame attempt by Family Guy to perpetuate the myth that Walt Disney supported the Nazis.

Audiences don’t seem to care whether these insulting remarks toward Walt Disney have any root in historical fact. The sentiment resonates because the Walt Disney Company is the most powerful entertainment brand in the world today, and the more successful it grows, the more people search for a way to rebel against its pervasive influence in global culture. For people who are tired of Disney products being shoved down their throats, watching scurrilous attacks on the company’s namesake provides a cathartic release. Truth is besides the point.