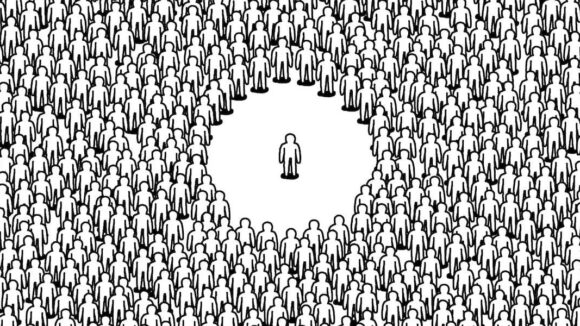 Among the dozens of short films that will screen in competition at Annecy next week, there’s one that wasn’t conceived as a film at all. In Michael Frei’s KIDS, a crowd of featureless humanoids enacts absurd, often violent scenarios, guided by some kind of insane groupthink. What isn’t apparent is that KIDS was simultaneously developed as a game, in which the player is tasked with shepherding these hapless figures.

Frei has been here before. After releasing his previous film Plug & Play, which asks similar questions about individuality and human contact, the Swiss animator teamed up with developer Mario von Rickenbach to adapt it into a game. Frei was inspired by how viewers interact with films online – how they tend to scrub, pause, or stop midway through, rather than passively watching.

Frei and von Rickenbach collaborated again on KIDS. This time, however, they envisioned it as both a game and a film from the start. But it actually began life as an installation, as Frei tells Cartoon Brew:

The first platform the project had was at the Museum for Digital Art (MuDA) in Zürich back in 2018. That was an extensive public beta-test for the project, showing not only the work in progress but also all the trash we created in the process of developing the project at the time. I also thought about a way to [convey] the characters’ physicality and weight not only by animation, sound, and how they react on input on a screen, but by making actual KIDS mannequins that we produced a few dozen of.

The project’s concept may be complex and its production unorthodox, but its aesthetic is as pared-back as Plug & Play’s. Frei has said that his work is about “reduction” – sure enough, the blank characters in KIDS inhabit a stark monochrome world which is every bit as binary as the choices they face:

My role is drawing and thinking while Mario is more into coding and thinking. I use different drawing tools, but my most important one is my finger. Mario is typing in various text editors to code. In the case of KIDS our stuff is then assembled in a game engine called Unity. The film and game make use of the same technology.

From the start, I wanted to create a film that uses code. I wished to retain my visually simple style while allowing for a complexity that I just couldn’t achieve using traditional methods of making 2d animation. It was exponentially more complex to develop KIDS as an animated short and game at the same time. With Plug & Play, a lot of the constraints were already given because there was a finished film. KIDS was an experiment from the beginning. We tested and abandoned ideas relentlessly during the last [few] years until KIDS grew to something we like.

The film premiered at the Berlinale in February and is currently touring festivals. The game recently became available to play on desktops, tablets, and phones — see the official website for details. It is published in collaboration with Double Fine Presents, and the project is co-produced by Playables, SRG SSR, and Arte.