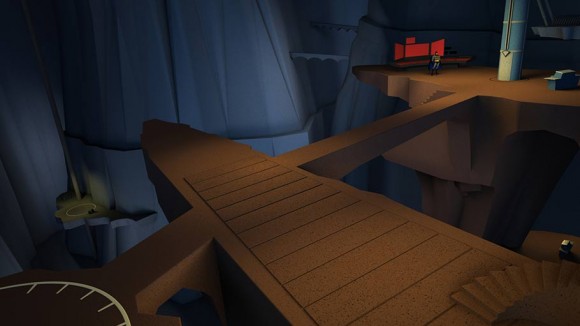 As the animation art form evolves in the 21st century, it has the potential to transcend its history as a passive viewing experience and become an immersive and interactive experience in which the viewer experiences the cartoon world from within. We’re not there and won’t be yet for a few years, but baby steps toward this goal are being taken everyday.

The latest step toward this new frontier is the news that show creator Bruce Timm is working with tech company Otoy to recreate the Batcave from Batman: The Animated Series as an immersive entertainment experience. Being produced in collaboration with Warner Digital Series and DC Entertainment, Batman’s space will be brought to life via interactive holographic video for consumer VR devices such as the Samsung GALAXY Gear VR, the Oculus Rift, and forthcoming ‘glasses-free’ light field displays. Timm is overseeing the adaptation of the show’s original 1992 designs into a three-dimensional universe, while OTOY is developing tools that preserve the show’s drawing style in 3D space “without requiring any post-production work or manual artist intervention.” The project, which was first announced last month, uses OTOY’s OctaneRender software and light field rendering to recreate the Batcave so that it can be explored from every vantage point.

OTOY describes their rendering technology as such:

Each frame of video accurately simulates every ray of light in a given scene or environment and every interaction that each light ray has with the surfaces and materials therein. Every reflection, refraction, and absorption of that field of light is modelled as it would be in the real world. The same caliber of incredibly accurate rendering is used in the special effects work of major motion pictures, typically taking hours if not days to render out one extremely polished and realistic frame for use in a movie.

This is the first commercial endeavor that employs OTOY’s rendering and holographic streaming technology. A first release through the ORBX viewer app is being targeted for this winter.