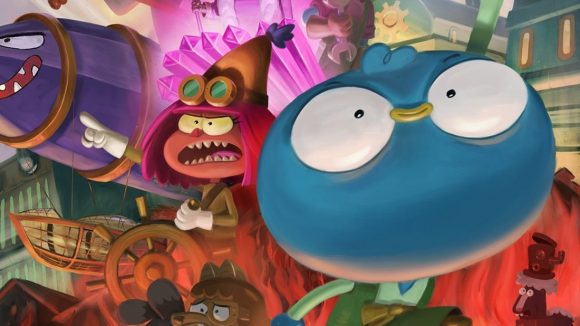 The current sound of children’s television animation has expanded notably with composer Ego Plum’s score to the Nickelodeon series Harvey Beaks, in which electronics and guitars fuse with the sound of a live orchestra.

Whereas orchestral music and the animated cartoon were once inextricable during Hollywood’s Golden Age, the use of orchestras for television animation has ebbed and flowed throughout time. With the 1990s came a resurgence of fully orchestral cartoon music, but as production budgets contracted in the 2000s, composers moved towards hybrid scores, combining computer generated and synthesized sounds with small numbers of performing musicians, or in some cases, no live players at all.

Bucking this trend is Harvey Beaks, which combines a quirky, hybrid-DIY sound with the warmth and dynamism of an orchestra in most episodes. Plum spoke to Cartoon Brew about Harvey and the collaborations that bring its sound to life.

Cartoon Brew: What inspired you to integrate a 40-piece orchestra into the Harvey Beaks score?

Ego Plum: Harvey Beaks is slower paced, tranquil, and almost therapeutic in its nature. It’s full of lovely, hypnotic backgrounds and gorgeous art. I had to find a way to match [creator] C.H. Greenblatt’s simple, melodic storytelling and the overall innocence of the world and felt that 40 human beings playing strings was the way to do it.

When I got hired, I put together a heartfelt plea to the networks to go back to the way cartoons used to be done in the Golden Age of Animation. I talked about Carl Stalling and what his work meant to me, and how we would be breaking new ground if Nickelodeon took this risk. Bless our producer and execs, who saw the value in doing this, and actually agreed to shell out for an orchestra.

Traditionally, orchestral television scores are recorded one episode at a time. You elected to record the music for multiple seasons all at once. Why go this route?

Ego Plum: Many months prior to going into the studio in Seattle, I’ll sit with C.H. (Carl) and we’ll discuss the special moments that will need big music in the coming season. So I’ll make of list of important themes and cues that will be essential. Carl loves having central themes that get reused throughout the series, similar to Peanuts, so it’s been great having a bunch of fun themes for the characters that we revisit all the time.

The music is also recorded in such a way that we can use only the strings of a certain theme, or maybe just the woodwinds, or just the brass, or any combination. In addition, I’ll overdub electronic elements over the orchestral recordings so any one cue or theme I record with an orchestra can end up being used 10 different ways. [We spend] two or three days with the big orchestra twice a year, and we can have everything we need for an entire season. It’s not that unrealistic or unachievable.

To produce your orchestral score, you reached out to Steve Bartek, who has orchestrated music for many iconic animation moments (such as The Nightmare Before Christmas) through his work with composer Danny Elfman. How did your relationship come about?

Ego Plum: I’ve always been a huge fan of Steve’s band Oingo Boingo. I reached out to him about doing some live shows together, and he became a mentor in some ways. When I finally got a series, I told him that I had put together this proposal [to record with an orchestra]. He was very generous and I’m eternally grateful for his contributions. He’s helped me understand the language of the orchestra.

In the two-part “Steampunks” musical special that debuted last week, you had nearly 60 players. What were the demands of this episode that led to the expanded instrumentation?

Ego Plum: The “Steampunks” special was essentially the Harvey Beaks Movie. I treated that music no differently than I would have treated a feature film score. We wanted a big, big sound; we also wanted some traditional old Hollywood-style orchestration. So we had to fill Studio X in Seattle with tons of brass, woodwinds, and strings. It’s my favorite thing I’ve gotten to do on Harvey Beaks.

Tell me about your collaboration with C.H. Greenblatt. How did you meet, and how did you present your musical ideas to him?

Ego Plum: I had never met C.H. Greenblatt and Nickelodeon sent me a few scenes to audition with. [The] style that the show was looking for was a bit more acoustic guitar-based and organic sounding. I decided to basically ignore the original direction and score the scenes using old Casio keyboards and strange chirpy sounds, and also included a separate piece of music I labeled “Bad Seeds Theme.” (The show’s working title was Bad Seeds.) I ended up getting the job and that theme demo is now the Harvey Beaks theme song.

Carl is now a dear friend. We practice fencing together. He has one of the most graceful counter-ripostes you’ll ever see.

Bob Mothersbaugh, who performs on the Harvey Beaks theme, was one of the composers on Rugrats. Was there any discussion about of having an intentional musical connection to the Nickelodeon cartoons of the 90s?

Ego Plum: There was no discussion. In fact, after the music was recorded and married to the titles, I surprised everyone with the news that the theme featured Bob Mothersbaugh from Devo, Steve Bartek from Oingo Boingo, and David J from Bauhaus.

Sometime around the age of 12 or 13, my older brother made me a cassette of Mark Mothersbaugh’s Musik For Insomniaks which I listened to obsessively. It was the “secret” instrumental music that the guy from DEVO was releasing independently. It sounded like minimalistic möbius-strip Muzak for elevators and plastic surgeon’s offices. Then when I was 16 I remember hearing what sounded like the Musik For Insomniaks playing behind a children’s show called Rugrats! It blew my mind and felt like the most subversive thing in the world. Devo were these pervert mutant robots and here they were putting their music in a children’s show. I think from that point on, I knew that I was going to write music for a cartoon at Nickelodeon.

What is your advice for creators who want to use live orchestras for their cartoons?

Ego Plum: Push for it. Do whatever you can! It’s a language that’s worth preserving and bringing back to modern animation. It elevates the art form. Nickelodeon was gracious enough to make 40-60 musicians happen for Harvey Beaks and I would love to hear that on other shows, besides the Seth MacFarlane properties and The Simpsons. There are tons of talented guys out there more capable than me who deserve this opportunity, but more importantly — cartoons themselves deserve it!