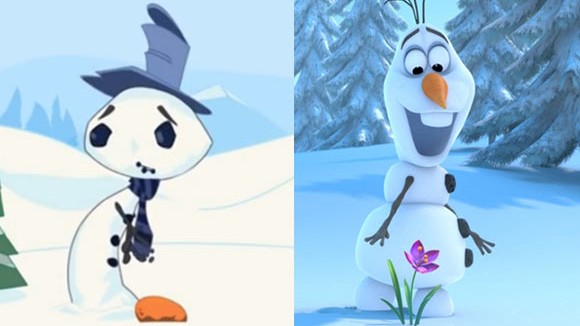 Does Disney’s Frozen owe some of its success to an independently produced 2D digital short called The Snowman?

That question may soon be decided: last week, a federal court ruling made possible a trial that would pit the mega-studio against an independent filmmaker claiming copyright infringement.

Kelly Wilson, co-director with Neil Wrischnik of the four-minute short The Snowman, filed suit against Disney in March 2014, alleging that the Frozen teaser trailer, released in June 2013, “copies the key plot elements, characters, themes, events, setting, mood, pace, dialogue, and sequence” of her short. Both works feature snowmen who must recover their carrot noses after the noses pop off and slide across a frozen pond.

Federal judge Vince Chhabria rejected Disney’s motion for summary judgment (a formal request that he resolve the case in the studio’s favor without a jury), allowing the case to move forward. A trial could begin this fall.

Despite showing The Snowman at festivals since February 2011, Wilson registered her short with the U.S. Copyright Office in July 2013, a month after the Frozen trailer was released.

In her suit, Wilson contends that Pixar employees would have seen The Snowman when it competed at the 2011 San Francisco International Film Festival in the same category as Play by Play, a live-action short film created by Pixar employees outside of the studio. According to Wilson, among those who attended the festival was Play by Play executive producer Elyse Klaidman, who is the director of Pixar’s archives and its in-house training program.

Wilson also argues that Disney had access to The Snowman since she included the work in four separate Disney job applications from 2009 to 2012. (Her applications, it appears, were unsuccessful.)

Finally, Wilson produced search analytics that indicated that someone, somewhere, had arrived at The Snowman on YouTube by searching for the term “snowman and rabbit” around the time when Disney’s artists would have been working on the Frozen teaser. This, Wilson argued, was surely Disney personnel.

Wilson asserted that the individuals who had access to The Snowman were in communications “on a regular basis” with Disney and Pixar head John Lasseter, who was heavily involved in the creation of the Frozen teaser.

Wilson is not required to categorically demonstrate that Disney’s artists actually did view her work, but that there was a “reasonable possibility” that they had the opportunity to do so.

For its part, Disney produced brainstorming sessions, storyboards, and other evidence of independent creation, also arguing that any “superficial” similarities between the two works flow from the “basic idea of a snowman losing his nose on an ice pond with an animal antagonist.” The studio sought to illustrate how the same basic concept can spawn distinct works, noting that its own trailer was a “madcap physical comedy” whereas The Snowman dramatized a moral dilemma.

But, in his order last week, Judge Chhabria noted that Klaidman frequently interacts with Lasseter “and has access to him whenever she needs to speak with him.” The judge determined that this connection, combined with the rest of Wilson’s evidence, was enough to warrant putting the case before a jury.

You be the judge (in a strictly non-legal sense):