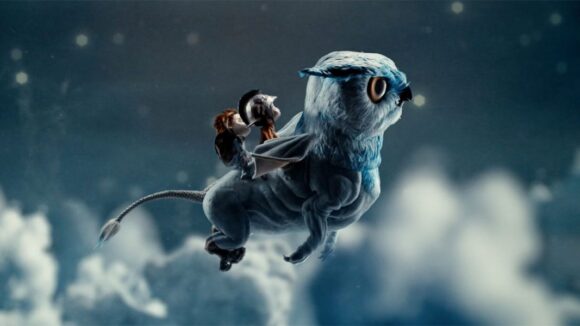 Polish artists have supported international stop motion productions for many years, creating puppets, sets, and props for films such as Peter and the Wolf by Suzie Templeton, which won the Academy Award, Danny Boy directed by Marek Skrobecki, and Mask by Quay Brothers.

As Polish stop motion animation celebrates its 70th anniversary this year, such collaborations between Polish artists and international producers continue to grow, and one of the key companies playing a role in that growth is Momakin. In this piece, we take a look at a couple of Momakin’s high-profile collaborations and learn why Poland is so highly in demand by animation producers all over the world.

Polish artists on the bigscreen

The film is directed by Luis Tellez, with Karla Castañeda and Francesca Berlingieri Maxwell as production designers. It is Mexico’s first stop-motion feature film ever made produced by Paula Astorga and Milko Luis, who have often tackled challenging projects in the past.

The main character, a girl named Camila, goes on a mission to save her parents and the rest of the city from the clutches of a wicked businessman who has created an insomnia pill that forces people to remain awake and work their whole life. Camila is the only person who can sleep, and in her dreams, she meets Cesar, a nine-year-old boy, with whom she embarks on a journey involving magical characters and mythic creatures.

The cooperation between the film’s Mexican crew and Polish artists started in 2016. Using the character concept designs by director Luis Tellez, as well as references and precise information about the movement of particular puppets, artists in Poland created a final design for each puppet and its armature design (as well as mechanical heads, for most puppets), before producing the final puppets.

The first test puppet created for the project was Cesar, the boy who lives in a world of dreams. “On the basis of that, we made a numerous decisions, including final scale of the puppets,” said Katarzyna Gromadzka from Momakin, which represents the Polish artists who worked on the project. After the character was figured out, the main character Camila was created. For the needs of the production, over 40 puppets, representing a dozen or so leading and supporting characters, will be created plus extras and background characters. And the diversity of them will be huge, added Gromadzka. “The Cesar’s puppet is 8.6 inches, Camila’s puppet is 9.4 inches, and the mythic Chimera’s puppet is a giant – 20 inches high and 27.5 inches long!”

So far, the greatest challenge during the pre-production phase has been creating a communication system that allows for an efficient exchange of information across a distance of 6,000 miles. “For example, it was necessary to create a system for how to discuss colors that are often distorted between the photos, on the screen, and when printed,” explained Gromadzka.

The second challenge was the fact that the decorations which must adorn the puppets (both technically and aesthetically) are created entirely in Mexico. Consequently, Polish artists do not have access to them for comparison or testing.

There are other practical matters as well. “Of course the aspect of shipping puppets matters as well,” said Gromadzka. “Each time they must be precisely protected and hoped that they will not be damaged in transport.” Consideration must also be made between the time zones differences of Mexico and Poland. “However, everything can be solved if both sides count on communication and have a task-based approach to occurring difficulties”, reassured Gromadzka.

Guadalajara in Mexico, a place where Inzomnia is being created, is an important place for Mexican film and animation. It is both the hometown of famed Mexican filmmaker Guillermo del Toro, as well as a hub of stop motion production.

So why was the production of puppets handed over to artists from Poland, a country halfway around the world? Paula Astorga Riestra, a producer of Inzomnia, offered a perspective: “Luis [Tellez], I, and all of the team are huge fans of the Polish animation tradition and their own aesthetics, so it was always our first option as an artistic partner. It is also true that even when their animation techniques and craft are of the highest possible quality, it is still within an approachable budget, which is always an amazing opportunity for enriching our production standards and developing a better animation industry path worldwide”.

Puppets made by Polish artists are highly valued for their solidity, expert precision and attention to detail. They’ve been used in the past for Mexican productions by Jonathan Ostos Yaber (for example: Mr. Wire’s Nostalgia), as well as European productions, such as the Slovenian children series Koyaa by Kolja Saksida. “It should be mentioned that the producers of Inzomnia are interested in extending the cooperation with other Polish members of a creative team,” said Katarzyna Gromadzka.

At the same time another Polish crew at Momakin is working on sequences using miniature models and figurines for a docudrama children series for German broadcaster SWR under the working title of Small Hands in World War II, directed by Matthias Zirzow and produced by German LOOKSfilm in cooperation with Polish partners TOTO Studio, EC1 Łódź – City of Culture, and CeTA. The series combines live-action sequences and archival footage with scenes using miniature models, creating an atmospheric visualization of historical and personal stories in the form of a three-dimensional model world. The format of the series has already been successfully used in a series about World War I.

In the new series, a huge model of a three-dimensional map of Europe will help to show the geopolitical situation at any given moment of the story. With tin soldiers, miniature tanks, and warships, it will also allow to visualize movement of armies and changes of borders and fronts. Other models will recreate places which no longer exist, such us prewar cities and towns.

The models will show the vast scale of the ghetto area or a concentration camp, helping young viewers to grasp the amount of people imprisoned and killed during World War II. The models will also help to introduce military actions into the drama, such as bombings or tank attacks.

The series demanded a diverse vareity of miniature models representing different parts of Europe, Katarzyna Gromadzka explained. The Polish crew at Momakin had to create Norwegian fjords, the ghetto in Czestochowa, the Kazakh Steppe, and other landscapes, in addition to a dozen or so figurines in 1:16 scale, almost 40 figurines in 1:35 scale, and several dozens of tin soldiers in 1:72 scale. “The figurines,” said Gromadzka, “will serve as miniatures of the characters from live-action shots: protagonists of each episode, as well as soldiers, prisoners, and refugees. This month, they were used by a Polish crew for the realization of the effect shots at Wroclaw’s Audiovisual Technology Center.”

“LOOKSfilm is happy to coproduce the second season of Small Hands with Toto Studio and Momakin,” said LOOKSFilm producer Ramona Bergmann. “We worked together on the first season and want to continue the excellent cooperation. We have the great possibility to use the knowledge, experience, and unique style of Polish artists like Agata Gorządek who is the production designer for the series”.

While the artisanal quality and craft-based traditions of Polish animation are widely known, most artists who have worked on globally recognized projects remain largely anonymous. The Polish Quality project, led by Momakin, aims to change this.

Polish Quality, which is co-financed by the Polish Ministry of Culture and National Heritage and the Association of Polish Animation Producers (SPPA), has been created to promote the contributions of Polish artists and animation industry service-providing companies to international film producers, especially stop-motion animation.

Besides having a strong focus on promoting animators, the program showcases the artistic talents of puppet makers, set builders and prop makers, not just in the sphere of animation, but also for live-action sets and special effects, as well as crew members specializing in animation and miniature capture.

Gleaning the talents of an experienced crew is a reason for many producers to sit up and take an interest in co-productions with Polish companies or to consider contracting third-party services in Poland across the range of feature film, documentary and television production.

That is why Momakin, through Polish Quality, supports foreign producers looking for partners in Poland, whether in the form of co-producers, executive producers, or finding access to Polish finance.

To learn more about collaborating with film and animation artists from Poland, visit PolishQuality.Momakin.pl.