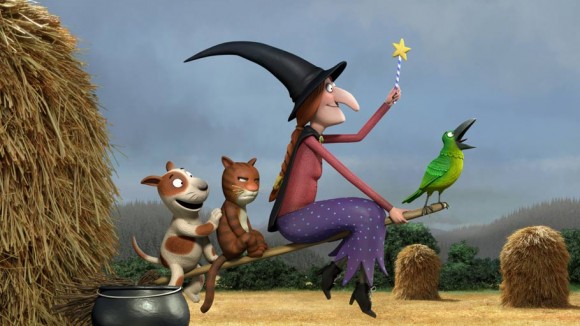 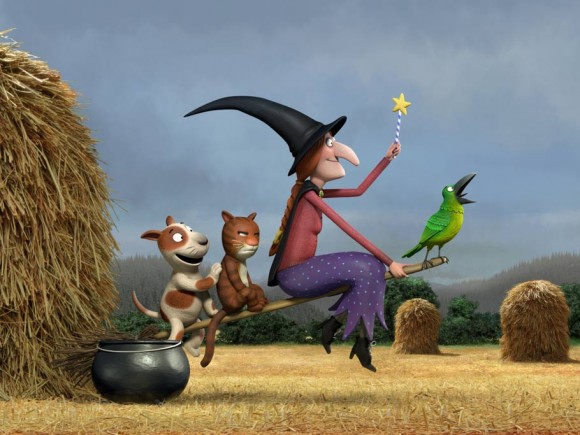 In this special Cartoon Brew series, we asked the five nominees of the 2013 Best Animated Short Academy Award to discuss the artwork of their films. Today we continue this exclusive look at the short contenders with Room on the Broom, a UK/German Magic Light Pictures (UK)/Studio Soi (Germany) co-production directed by Jan Lachauer and Max Lang. The 27-minute film originally debuted on BBC One on December 25th, 2012.

(Click on any of the images for a closer view. Explore the artwork of the other short nominees: Possessions, Feral, Mr. Hublot and Get A Horse!)

Jan Lachauer and Max Lang: Room on the Broom is a story of change and company. More and more characters join the well-balanced team of Witch and Cat on their magic broom. With each new member, their journey gets harder and harder.

But in the end it turns out that even if it’s harder to travel together, there are obstacles that you don’t want to face alone. Even if you are much faster on your own, you get much further as a group. And it’s not the size of the broom that should define a group, but the size of the group that should define a broom. Together they create a world where no one gets left behind.

Like in the story, the film itself was a group effort. Many very talented artists at studio soi and all across Europe contributed to its making. We’re very proud and grateful that we got to work with such an amazing team. 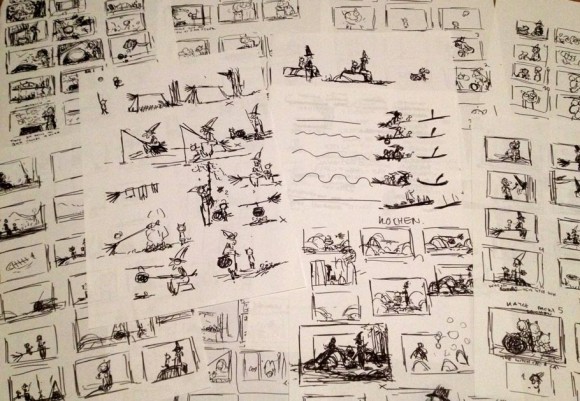 Jan Lachauer and Max Lang: For about six months we focused on the development of story and characters. The friendly Witch, an explorer who travels the land and helps others, is a character we are particularly proud of. While the Cat is a bit more conservative and doesn’t want things to change, the Witch stands for progress and welcomes the new and the unknown.

In these early thumbnail sketches we tried to explore the Witch’s and Cat’s relationship with each other and with their broom. We wanted their broom not just to be a flying broomstick but a multifunctional tool and essentially their home.

Jan Lachauer and Max Lang: This was one of the most challenging sequences to board and animate. We worked long and hard to get it right. It’s the lowpoint of the film, when the group falls apart and reunites. All of it told visually, without dialogue or narration. This sequence was animated by Waldemar Fast and animation supervisor Tobias v. Burkersroda, two good friends of ours who had previously worked on The Gruffalo. 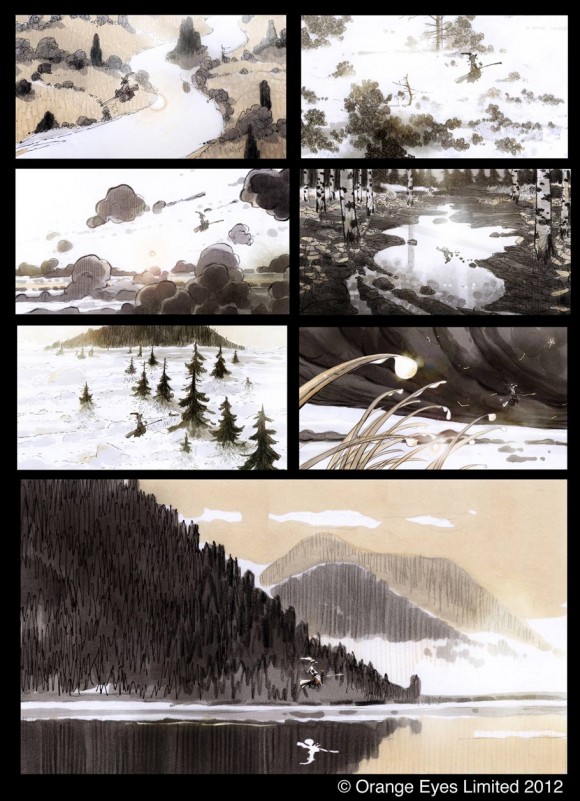 Jan Lachauer and Max Lang: Here’s some of Manu Arenas‘ magnificent concept art for Room on the Broom. He had already captured the spirit and atmosphere of the film perfectly while we were still struggling with the story. The shot of the Witch and the Cat flying over the lake was the inspiration for the start of the film. 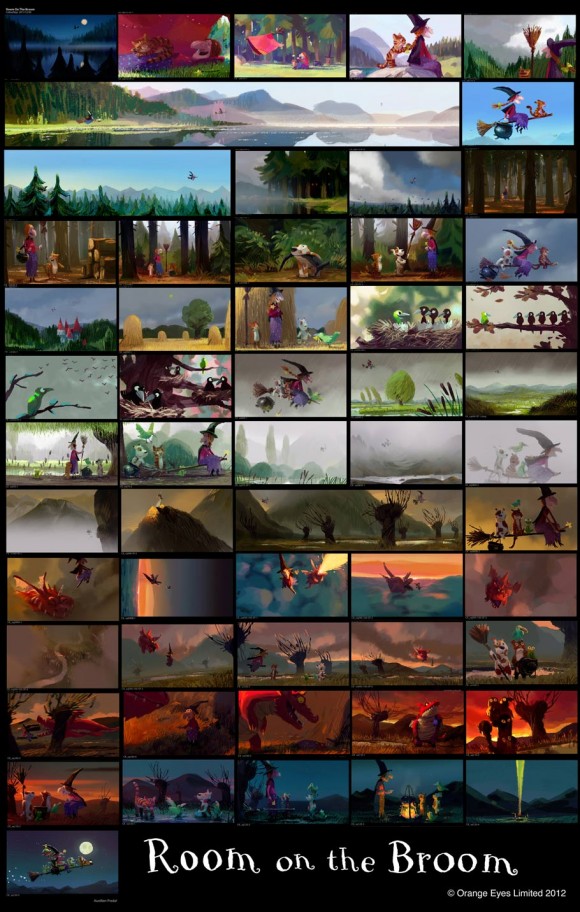 Jan Lachauer and Max Lang: Working with Aurelien Predal was just amazing. Within a few weeks he laid out the color script for the entire film. This color script would become our guide for the rest of the production and had a major influence on everything from set design and lighting to compositing.

Jan Lachauer and Max Lang: Inspired by Manu and Aurelien, the set builders, supervised by Klaus Morschheuser and Katja Moll, created the world of Room on the Broom. In these pictures you can see how they built a fir tree from actual broom bristles. For the needle-covered ground in the forest they used spices. It still amazes us how they would take everyday objects and turn them into something magical. 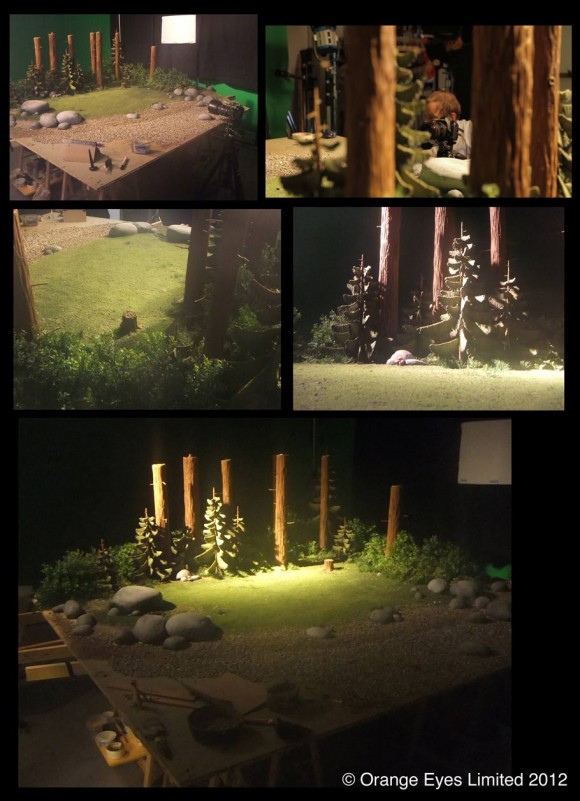 Jan Lachauer and Max Lang: DOP Daniel Moeller was faced with the challenge of translating Aurelien’s colorful sketches into physical cinematography. He literally painted with light

Jan Lachauer and Max Lang: The nine animators on Room on the Broom were not only incredibly talented but also very fast. They animated an average of 12 seconds a week while pushing the quality of the performance beyond our wildest expectations. Here you can see how they went from layout to final animation. This particularly lovely shot was animated by Robert Lehman.

Jan Lachauer and Max Lang: Inspired by Romanticism, we wanted to show our characters exposed to nature and weather within vast landscapes. It was not possible to build full-size sets that large, but we also did not want to lose the handmade quality so we built miniature sets, which were then photographed and arranged into beautiful matte-paintings. The fantastic matte painters—Alexander Lindner, Tobias Trebeljahr, and Jin-Ho Jeon—seamlessly expanded the sets further than our eyes could see.

Jan Lachauer and Max Lang: There are countless and very varied FX in Room on the Broom, from saliva to magic to dragon fire. It was not affordable to calculate simulations for all of them. More importantly, though, we are big fans of stylized effects that are designed and timed by artists. A lot of the FX in Room on the Broom are actually animated traditionally by 2D animator Andreu Campos and in the case of the fire composited by Tobias Gerdts.

Jan Lachauer and Max Lang: The music in Room on the Broom plays a very important role. Since we have long stretches with no dialogue or narration, the music carries a lot of the story and images. The wonderful Rene Aubry, who had already composed the music for The Gruffalo, helped us once again to elevate our pictures to new heights. Above you can listen to one of the pieces he created for Room on the Broom.

Explore the artwork of the other 2013 Oscar animated short nominees:
Possessions
Feral
Mr. Hublot
Get A Horse!