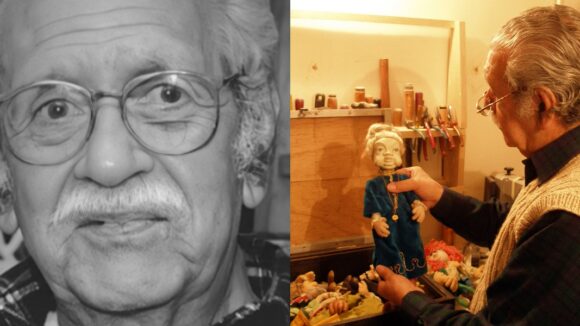 Colombian animation pioneer Fernando Laverde has died. He was 88.

Laverde was born in Bogota on December 17, 1933, and died in the same city on May 18, 2022. However his work and influence reached far beyond Colombia’s borders during his lifetime.

Laverde graduated high school in 1953 and started studying agriculture at university before dropping out to work as a director of photography and documentary filmmaker for Televisora ​​Nacional de Colombia. Eventually, he was promoted to producer and director.

In 1956, he moved to Madrid and got his first job working in animation as an assistant on Las Aventuras de Mumu (1967) for Televisión Española (TVE). Later, he directed La guitarrita española and was director of photography on La historia de música and the documentary Ernesto Bitetti. During his time in Europe, he became fascinated by stop motion films, particularly those of legendary Czech filmmakers Jiří Trnka and Jiří Barta.

He returned to Colombia in 1969, and directed Colombia’s contribution to Niños del mundo. That same year, he was invited by UNESCO to represent Colombia at a screenwriters course hosted by the National Institute of Cinematography in Buenos Aires. All the while, he continued working in cinema and served as director of photography on 1971’s Una tarde … un lunes, which won the Kodak Award for Best Photography.

Animation production in Colombia at that time was almost entirely regulated to advertisements and independent short films. When Laverde began developing his features, he did so mostly on his own and leaned heavily on skills and knowledge acquired during his time in Europe. With limited resources and few peers to lean on in Colombia, he made his films at an in-home studio, shooting them on a single lens Kingstone camera and using his daughter’s toys for characters and props.

Family was always paramount to Laverde, who considered his filmmaking a family business. His greatest support came from three sources. His wife Karina was a professional actress who helped design the costumes for his models, and more than just contributing their toys, his children also played key roles in Laverde’s filmmaking as they got older. His daughter Ana María would eventually become his assistant director and design sets, while his son Fernando Enrique built those sets, was Laverde’s director of photography, and operated the camera crane.

In 1975, he founded the Grupo de Cine Familiar where he later made the short film Rincones de Boyacá (1977). His feature debut came in 1978, with the stop motion film La pobre viejecita, which won the Colcultura award for best feature film. The following year, his animated short Un planeta llamado tierra won best short at the Festival of Colombian Cinema while another of his films, Pepitas Rojas, won best short at the first International Children’s Film Festival.

In 1983, he directed his second feature, Critóbal Colon, which won the Coral Prize at the International Festival of New Ibero-American Cinema in Havana, Cuba. In 1989, he directed his final feature Martín Fierro, based on the popular Argentine character of lore El Gaucho Martín Fierro, the protagonist of an epic poem by writer José Hernández.