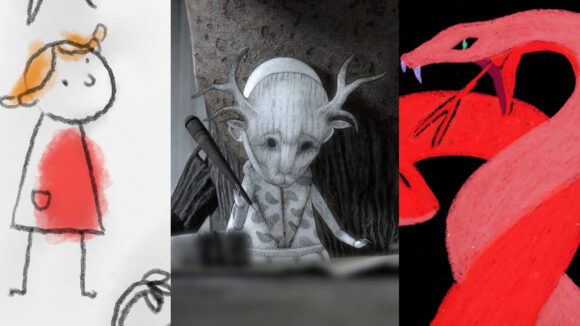 Animafest Zagreb, the world’s second-oldest animation festival, is gearing up to hold its 2021 edition in the Croatian capital on June 7–12. If it goes ahead, Animafest will have pulled off a rare feat: holding fully in-person events in both years of the pandemic (last year’s was delayed to the fall).

Covid or no Covid, Animafest has selected a fine crop of shorts for this year’s competition. The 112 films are split across three categories: the grand competition, the student competition, and the Croatian competition.

We’ve combed the line-up and picked out five notable shorts, from up-and-coming filmmakers and established pros alike. Watch the trailers below, then read more about this year’s program here.

Premiering at the festival is this mixed-media climate allegory from filmmaker-musician Meštrović. The logline is enticing: “If a global catastrophe is a state of mind, then music is the raft.”

A girl who has lost her mother stands on the road, refusing to move, and bringing everything else to a standstill in the process. This is the quirky premise of the new short from Toste and Sardinha em Lata, one of Portugal’s most interesting animation studios. The film will have its world premiere at Animafest.

Robert-Tourneur turned our heads with her visceral music video for Témé Tan’s “Looper,” which earned a Vimeo Staff Pick in 2015. The young Belgian director is back with this “bittersweet romance,” which depicts a sinuous encounter between two silhouettes in a forest.

Under the Skin, the Bark (Franck Dion, France)

One of the higher-profile Animafest world premieres, Under the Skin, the Bark follows a hunter’s journey through a spooky forest full of masked figures, combining 2d, 3d, and stop-motion animation. The director, who won Annecy’s Cristal for The Head Vanishes in 2016, made this film entirely alone in lockdown.

The Song of a Lost Boy (Daniel Quirke, U.K.)

A choirboy has a crisis of faith in this arresting coming-of-age story, which is told with bulb-headed wax puppets. The Song of a Lost Boy is a graduation film, made at the U.K.’s National Film and Television School; it netted a BAFTA nomination this year.

Image at top, left to right: “The Girl Who Stood Still,” “Under the Skin, the Bark,” “Hold Me Tight”