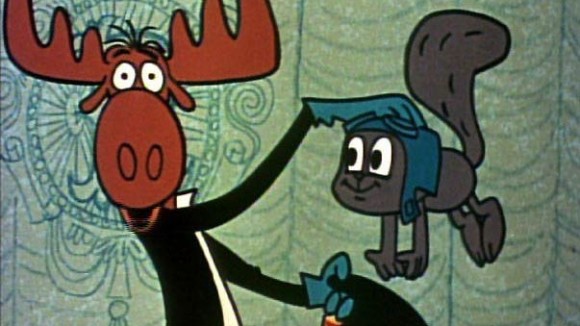 DreamWorks announced today their Rocky and Bullwinkle short. The film will be directed by veteran Disney director Gary Trousdale, who co-directed Beauty and the Beast and The Hunchback of Notre Dame. In recent years, he has directed DreamWorks specials like Shrek the Halls and Scared Shrekless.

Also notable, 95-year-old June Foray will voice Rocket J. Squirrel, a role that she originated 54 years ago. Tom Kenny, the voice of SpongeBob, will handle the role of Bullwinkle Moose. The press release (below) cites a 2014 release date but does not explicitly state that the film will play in front of Mr. Peabody and Sherman.

Glendale, CA and Frostbite Falls, MN – November 4, 2013 The moose is loose. DreamWorks Animation is giving audiences a dose of nostalgia in 2014 with an all new short film Rocky & Bullwinkle, featuring the legendary June Foray as the voice of Rocket “Rocky” J. Squirrel. This original and updated short will bring everyone’s favorite moose and squirrel back to the hearts of fans around the world while introducing the duo to a new generation.Also in 2014, the studio will release Mr. Peabody and Sherman on March 7, reintroducing characters who initially appeared on the original Rocky & Bullwinkle Show.

“For an incredible 83 years, June Foray has left a tremendous imprint on the entire entertainment industry,” said Executive Producer Tiffany Ward. “Her amazingly indelible performances have enchanted generations and earned her a permanent place in the annals of popular culture.”

The original Rocky & Bullwinkle Show (originally titled Rocky and His Friends) began airing on November 19, 1959 with supporting segments which included “Peabody’s Improbable History” – upon which DreamWorks Animation’s upcoming film Mr. Peabody and Sherman is based. Rocky, Bullwinkle, Natasha, Boris and a few other familiar faces get the show started with the all-new madcap adventure.

Rocky & Bullwinkle is being directed by Gary Trousdale (Beauty and the Beast), produced by Denise Nolan Cascino (Megamind) and written by Thomas Lennon & Robert Ben Garant (Night at the Museum). It stars June Foray (Rocky and His Friends) as the voice of Rocket J. Squirrel and Tom Kenny (SpongeBob SquarePants) as the voice of Bullwinkle Moose. The short will be released in 2014.