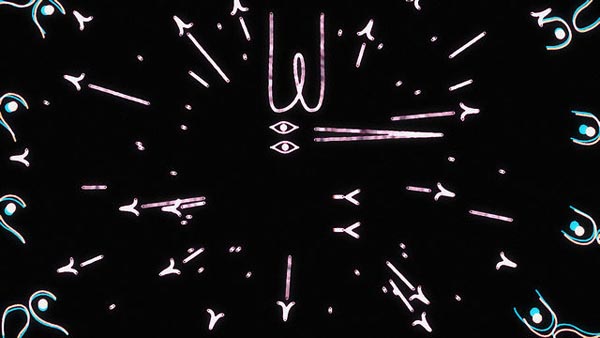 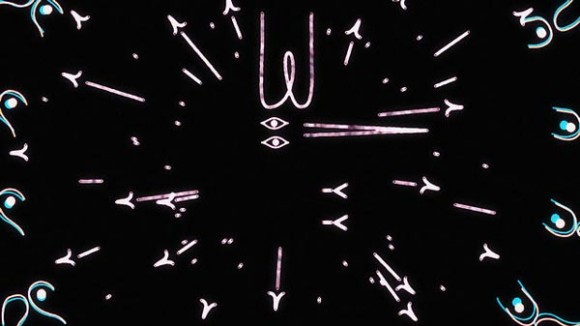 Within 15 seconds of hitting the play button on Kou Kou by Takashi Ohashi, I did something I rarely do when watching films on my laptop: I turned off the lights at my workspace to create a dark theater environment. Good abstract animation, like a good song, demands the audience’s full attention, and I sensed this was going to be something special.

Takashi Ohashi, who has been featured on our Animated Fragments feature, has created a masterful piece of abstract animation with Kou Kou. Ohashi does something rare for abstract filmmakers, which is to organize his visual ideas with the clarity, pacing and dynamism of a more traditionally narrative storyteller. The second ‘movement’ that begins around the 4-minute mark packs a real punch. The competing red and blue offsets create tension and instability in the imagery, which serves to heighten the visual excitement.

To a non-Japanese speaker, the film is a beautiful visual experience, but the Japanese speaker will enjoy an additional layer of depth. Ohashi sent Cartoon Brew the following explanation of the film:

Kou Kou is a visual work based on an abstract animation synchronized with a song comprising the unique syllabic sounds of the Japanese language, without actually using any full words.

It is in the elements of sounds from which words are made that we find syllabic sounds. In the case of the Japanese language, the linguistic roots, or ‘Yamato Kotoba,’ each individual sound possesses a unique meaning. For example, words containing ‘su’ exhibit a frictional characteristic and hence are used to represent a linear or direct movement. In modern-day Japanese, ‘sasu’ or ‘susumu’ represent a concrete, tangible action.

Furthermore, words with fewer syllables are used to express simple onomatopeia-like words, whereas the more syllables a word contains, the more concrete it becomes.

However, although a given syllabic combination may not be understood despite its constituent syllables possessing their own meanings, there are particular instances where we are able to discover meaning from a meaningless word.

This is what I feel is most interesting about the Japanese language and why I’ve thought to express myself by combining just how good the combination of vowels and consonants unique to Japanese resonates with music synched to abstract animation.

This musical composition was made by recording 6 natural voice vocal tracks from singer Luschka and selecting lyrics with Japanese syllabic combinations which afforded expression. The track comprises words which themselves are meaningless, but carefully combining syllables and their respective unique resonances ensured highly musical peaks and troughs.