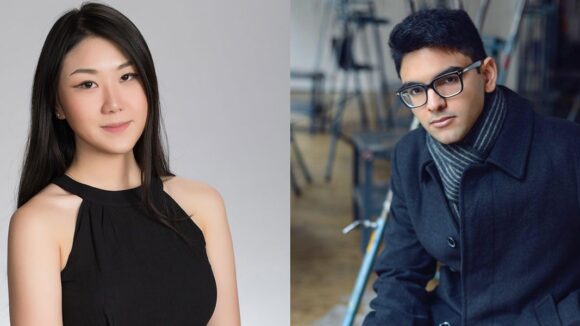 Making A Student Short: An Interview With 2 SVA MFA Computer Arts Alumni
by Devan Worth

Perhaps the hardest part of learning animation, with all the software, techniques, and even just the hotkeys you will need to drill into your head, is not knowing if any of it will be enough to keep viewers of your work interested and engaged – or at least get your message across.

Last week, I had the opportunity to speak with two recent alumni of School of Visual Arts’ MFA Computer Arts, Ninaad Kulkarni and Kirsten Cho, who have both had tremendous success showing their graduate short films at many important festivals and award ceremonies. Being a first-year student only months away from working on my own thesis, I pried into their creative minds about how their films came to be, and how they have grown from the experiences of making them.

Devan Worth: At SVA you were both just arriving in New York City and suddenly taking a full schedule of classes, even while you worked on your theses. Was this at all challenging? What were your courses like?

Kirsten Cho: For me, [moving to New York City] was the biggest challenge in my life, because at that time I knew nobody here and I couldn’t speak English as well … I felt I had to do everything by myself, but at the same time it was the biggest step for my career as a designer.

[In our discussion, Kirsten further noted that Production Issues courses really helped with her thesis, noting that her professors during her thesis year were especially helpful in compositing her film and correcting mistakes each week. Both Kirsten and Ninaad reminisced over courses like Animation Culture and Digital Matte Painting, which both introduce exciting contemporary and classic works of animation history, and require students to reproduce similar pieces.]

Ninaad Kulkarni: The hardest thing, I would say, was trying to make the most out of what everything SVA MFA Computer Arts offers. As you know there are three different tracks – Animation, Motion Graphics, and Fine Art – and I wanted to do all of them! Because they are all amazing and two years is just not enough.

[Ninaad also recounted taking over nine extra courses, through audits and workshops, during his time at the school with topics including cinematography, vr storytelling, and 2d animation.]

What was the hardest part of your process overall?

Cho: When I was in Korea, I’d only handled 2d software, such as After Effects. I learned Cinema 4D here… Now I use it all the time, but before being here I didn’t know any 3d at all.

[Kirsten went on to explain that not only did she build the majority of her film in Cinema 4D, but animated and rendered in Cinema 4D as well for two months. Having just learned the software in less than a year at SVA before producing her film, her accomplishments are all the more impressive. Some of her major accomplishments include the Student Academy Awards, the Adobe Design Achievement Awards, and the AT&T Film Awards for which she won the first prize. “I needed to do everything by myself so,” she added about her thesis experience,” from writing the story, to making the storyboards, and animatics, modeling, texturing, animation, lighting, rendering, and compositing. It was hard, yeah!”]

Kulkarni: One of the biggest challenges is to learn and unlearn when you’re coming here – you come in with the mindset that you know a lot of stuff, I think a lot of us have done some work in the past, but if you come with that mindset you’re not going to take a lot from here.

Was there any part of the process you found to be the most fun?

Kulkarni: Thesis semesters are definitely the toughest and the most fun. You have a good combination of sleepless nights and eureka moments… You know, when you are working all night, it’s four in the morning, you have not moved an inch in your project, and suddenly something sparks up and you’ve cracked it! Then from there it’s just two months of dedicated work on that one thing. That was what made it fun.

Cho: I like everything I’ve done, but if I have to choose one I would say the story part. I could imagine anything I wanted, like what if we can choose our baby’s personality? What if this would happen… what if that could happen… that was the most interesting part.

How are things different now, in terms of your work, having graduated from SVA MFA Computer Arts?

Kulkarni: [My work] has definitely taken leaps and bounds, jumps ahead. [laughs] I knew what I wanted when I came for this masters, but I was very surprised with how much there was to offer, not only from the city but the instructors. And the response we’ve gotten at festivals is just amazing, I would say for both of us.

Kulkarni: The good thing about SVA too, is that they take you through the back-end as well. So something that would be so tedious becomes just a simple Python script. Simple tasks like applying a certain attribute to, say, 100 trees in my scene – before I would have been going through each tree to apply that attribute, where now it’s just a script.

Not only teaching the fundamentals of creative tools like Cinema 4D and Autodesk Maya, but delving deeper into the code and hardware that make such programs possible is an essential part of the curriculum. Doing so allows students like myself to change comfortably between very different programs with the same fundamental knowledge of the code to expedite my workflow.

Cho: I can handle lots of programs [now], like C4D and After Effects, which I like the most.

How has it been taking your films around to festivals? Have you gotten any particularly interesting reactions?

Kulkarni: Yes actually! I suppose the film is about science in some way, but I would have never thought the science community would accept it in that sense – it recently screened at the Raw Science Film Festival, where I got to rub shoulders with astronauts who had showed up, and [Nobel Prize-winning theoretical physicist] Kip Thorne… It was amazing how a three-minute piece is being accepted by these people.

Cho: I think there are mainly two different kinds of reactions [to my film]; some people just think it’s fun, because my film has some of sense of humor, but others take the film very seriously, which is kind of scary!

[Kirsten talked about how one part of the SVA curriculum required her to synopsize and pitch her project to several staff members and instructors as she was making the film. Having to go through several feedback sessions and representing the piece to so many people, she began to feel more confident in presenting her work internationally, where she has won over 25 nominations and awards.]

Kulkarni: It’s one thing to make a film but I’ve realized it’s a different job to represent your project; the school has poised us as professionals in the industry. It has really made us ready to represent ourselves whether it’s the Museum of Modern Art, where my film screened, or the Woodstock Film Festival, or any of these festivals. To give a face to your work – thats something that they’ve done really well.

What I really admire in both of the films is that you can really feel that these were things you were thinking deeply on at the time – where would you say that inspiration came from?

Kulkarni: For me, I was trying to compare how different where I come from is from New York City. Of course that was based on many conversations I was having with friends from here, but there was this constant lack of time that forced me to investigate. So it started from there, and it was only later in the process I realized it was not about my perception of time, but how I could gather various perspectives on it, and how I can tell my perspective through those voices. So that’s how KCLOC came about for me.

Cho: I just wanted to critique the state of humanity. Nowadays people are really bound by machines likes smartphones and computers, and I want to show our potential future to all of them. [Visually, I] was looking to emulate some of my favorite 3d artists, getting the machines just right and movements into rhythm.

Would you go back and tweak anything in your films?

Kulkarni: Partially yes. I mean I don’t think I’ve ever looked at a project and been like, ‘That is perfect.’ I’ve seen it at so many festivals now, and I spot so many problems in it, which of course I won’t highlight because everyone would know what the problems are. [laughter] I would never go back to the project – I would try to implement it in the next project – and that’s what drives you to do more work, and better work.

Before wrapping up our discussion and leaving me to start thinking and planning for my own thesis, Ninaad offered me a touching piece of advice, which I think carries beyond SVA and to any student of animation: “You’re going to be fine once you are finished here, and you will never stop learning. It’s just a matter of doing what you want to do and what you set yourself up to do.

Ninaad is currently involved in several exciting projects, including a virtual reality collaboration between Bill Plympton and SVA MFA Computer Arts, a personal vr project concerning the partition of India and Pakistan, and a commitment to host the upcoming NAB Show Live Animation panel. Tune in and be sure to watch his thesis film, KCLOC, as it continues to tour.

Kirsten is currently freelancing animated motion graphic design, having just completed a design for the PyeongChang 2018 Winter Olympics. You can watch her film and other work here.