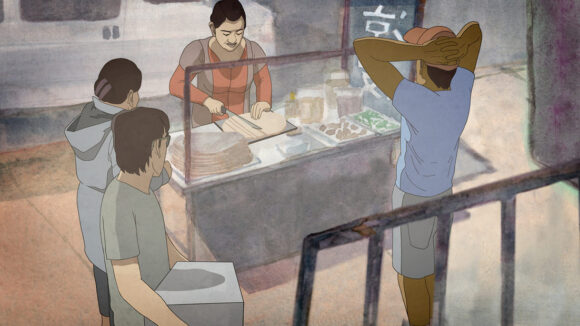 To encourage animators to try out new tools and techniques following the release of Harmony 21, Toon Boom Animation assembled a demo pack titled “The Ingredients of Animation,” which features work from six artists participating in the company’s Ambassador Program. Each artist hired for the project contributed scenes, made using a variety of cutout and paperless techniques — and were inspired by recipes they have a personal connection to.

Food and family are often inextricably baked together as concepts, at least for Mollie Ong. During lockdown, the L.A.-based animator and daughter of Singaporean immigrants got a taste for her heritage by learning to make liang pi, an ancient noodle dish whose name translates to “cold skin.” She then brought this connection with heritage and history to life using Harmony 21.

Though Ong is a Toon Boom Ambassador and recent CalArts graduate, she only began using Harmony recently. One would never know, given how seasoned her ten-second short felt. Ong’s Instagram illustrates the artistic taste she has for hand-drawn sketches and watercolor paintings, both of which she was able to integrate effortlessly into her piece using Harmony 21’s layering, drawing, and coloring tools.

The results, much like liang pi, are best served cold. Cooked up over six weeks, Ong’s short feels professional and polished, playfully using the magic ingredients of frame-by-frame paperless hand-drawn animation and an expansive color palette to create a truly savory piece that tells the story of this timeless dish. Below, Ong tells us about her artistic journey, how she prepared her short in just six weeks, and which Harmony 21 tools helped along the way.

Cartoon Brew: How did you get into animation?

Mollie Ong: I’ve been drawing since I was a child, though nobody in my family was really into art. When my parents would ask me what I wanted to be, I answered an artist — and then they were like, “But what do you really want to be?” I didn’t see art as a career option until high school.

James Jean’s artwork made me want to go into art professionally. I was really inspired by his illustrations. I started exploring creative jobs that could support me and animation was one of them, so I looked into it as a senior. I did two years of animation at community college before transferring to CalArts. And I have been working in animation since graduating.

What are you working on at the moment?

I’ve been doing a lot of work with Watcher Entertainment. It’s a YouTube channel by Ryan Bergara and Shane Madej from BuzzFeed. I’ve been helping out mainly with the Are You Scared series and they’re starting to bring me onto other minisodes.

And you’ve been working on the Harmony 21 demo! How long have you been using Toon Boom Harmony for?

I was more familiar with Storyboard Pro going through school at CalArts; I didn’t really get a chance to try Toon Boom Harmony until I become an ambassador earlier this year. It’s been really easy to learn, and I was able to pick it up for this piece. I’ve been playing around with it and trying to create a new demo reel with it.

It’s amazing that you produced such a beautiful and technical piece, having just picked up Harmony!

Yeah, I was freaking out, but then when I got hands-on with it everything made sense. The hotkeys and all the shortcuts made it a lot faster.

What made you want to learn Toon Boom Harmony?

I wanted to learn Harmony mainly because it is vector-based. I saw a lot of work coming out that looked clean and that was something I always missed with other programs. The cleanup was also really simple.

What was the inspiration for the piece you created in Harmony 21?

Since the pandemic began, I took the chance to learn more about cooking traditional Chinese food. Growing up, my parents gave us more of an American household so we would fit in more. I’ve been researching Chinese cooking and the history behind it, so I thought this was the best chance to play with those ideas.

I chose a dish called cold noodles, or liang pi — an ancient dish created by one of the first dynasties. For this piece, I tried to incorporate imagery from older times and then bring it into the modern era. We start with the ladies kneading the dough in a more rustic location and then we end with it being sold in the street from a food stall in China, which is kind of how you see it today.

Did you learn how to make liang pi yourself during lockdown?

Yeah, through a lot of trial and error. [Laughs]

When you have the time during lockdown, why not?

Yeah, and it was hard to find what parts of the process to include in the story because I only had ten seconds. The first scene was boiling the spices, and then we go into kneading the dough and steaming — and then eating, of course.

The most important part! So how long did it take you to produce that whole ten-second short?

Your work has a beautiful watercolor and sketch quality to it. Could you tell us about how you used Harmony 21 to create that look?

It was actually a lot simpler than I thought it would be. It was just a matter of bringing in a scan texture and adding it onto the colur swatch option before layering the different colors on the same objects. Harmony also allowed me to manipulate the texture so that it moved along with the characters. Then I would just have to pick through some of the frames that were not in the right position and reposition them.

It looks like you also played with the opacity tools, color palettes, and the paint tools. How did those factor into creating this watercolor effect?

Harmony 21 allowed me to color certain parts of the image, texture that, and then create an overlapping shape over that existing texture with a different color at a different opacity. It created this watercolor effect where you have these overlapping strokes. It is a lot of creating individual shapes that represent brushstrokes and then combining them to create a whole image.

Another of the other standout parts of your short was that scene transition with the bowl of noodles. How did you do that?

It was just a matter of layering the timeline so that the bowl of noodles overlapped on the previous scene, and then at one point covered the width of the scene. That’s where I was able to cut out the previous scene and start the next one. Just a simple graphic swipe, really.

Basically, just another use of Harmony 21’s layering tool?

Yeah, but in the overall timeline. With that scene, because I had to animate the bowl of noodles as well as it swiped across, Harmony came in handy: you could copy and paste and reuse the previous frame without losing the line quality, because it is vector-based. I was able to do that scene transition in two days, whereas before it would have taken me a week.

When you used the bowl to transition into the next scene and the noodles and cilantro are moving around too, was that also using layering?

First, I had to do the actual noodle animation and that was frame-by-frame tracking. For the other ingredients, I had to track them on top of the noodles and how they move. Again, frame by frame, moving each — selecting and moving or erasing and redrawing, depending on how it moved with the noodles.

You’re hand-drawing them all the way along?

That’s amazing! As an artist relatively new to the program, are you enjoying Harmony’s hand-drawing features?

Yeah, definitely. I prefer to hand-draw because it just gives a different feeling, rather than just puppet movements. It allowed me to do the noodles with that fluid movement.

Were there any other Harmony 21 features that really stood out?

The coloring tools. The fact that you could use the pen tool to make an invisible line so that you can shade quickly. Transferring the linework to the under layers allowed me to do really sketchy animation and clean up on another layer, and then transfer that same information to the color layers.

It was really amazing what you did in six weeks, especially since you were learning Harmony as you went.

Yeah, the program made it a lot easier to do it fast.

What other projects do you have coming up?

So far, it’s just freelancing for smaller companies. I’m also trying to pursue oil painting on the side. Somehow, I want to create a demo reel that merges my love for painting and animation by animating this painting look. I’m just waiting for the right amount of time to try to develop that.

And do you think you’ll do that in Harmony?

Definitely. I just need more time to play around with the tools!

Want a taste of the newest features in Harmony 21? Discover the new features here and download a 21-day trial. Curious about the other “Ingredients of Animation”? You can find more articles about the participating artists here.