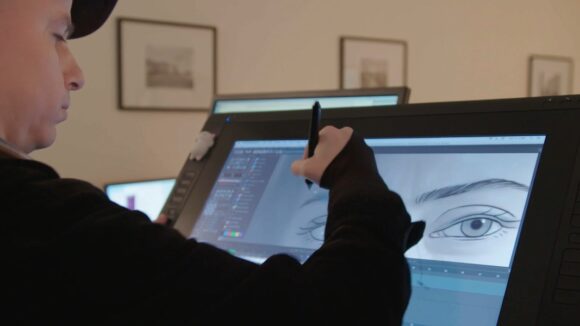 Animators choose between different styles of movement, from cartoony to realistic to experimental. A naturalistic style is one choice among others. Yet this option — creating human characters that appear and move with the highest degree of realism — continues to pose great challenges in 2d computer animation.

This is why one of TVPaint‘s objectives is to equip artists with the ideal tools to create realistic animation. Animation is easier, cheaper, and faster on a tablet than on paper, which is why traditional animators around the world are adopting the software. The result is similar to hand-drawn animation, and the process provides them with a range of tools to achieve their goals.

Rotoscoping is a technique whereby animators trace over filmed footage, frame by frame, to reproduce realistic movement. Originally, it involved projecting live-action footage onto a glass panel; animators then traced over the image.

TVPaint offers the possibility to draw frame by frame, as well as brushes that let artists trace curves around the subject with detail and precision, and a Light Table tool that help animators add definition. This is what makes TVPaint such a rich and versatile software for creating great rotoscoped animation.

From a completed roto, the artist generates a matte painting in black and white that perfectly matches the object on all planes. The rendering looks a lot like animation that’s traditionally rotoscoped by hand. Also, the colorization is simple and fast thanks to the CTG Layer tool.

Rotoscope features in TVPaint allow for multiple applications, ranging from character movement in feature films to dance scenes in music videos. A good example of the use of TVPaint for rotoscoping is the series Undone, which premiered in September 2019 on Amazon Prime Video. In the video below, director Hisko Hulsing explains the making of the series:

In September, we conducted an interview with Craig Staggs. As artistic director of the studio Minnow Mountain, Staggs oversaw production of the rotoscoped animation for Undone. Read on for the interview:

Cartoon Brew: Why and how did you use TVPaint to rotoscope Undone?

Staggs: TVPaint was used as our primary platform for producing the line animation layers for Undone. First, the video is loaded as a layer and the opacity is lowered so the animator can see the line work. Secondly, the animator rotoscopes one character at a time using a custom “pencil” tool Hisko Hulsing designed for this project.

We use frame-by-frame hand-drawn rotoscoping, custom brush animation, roto-tracking, and limited animation approaches like loops and holds to complete the character layers.

We worked on twos, or 12 fps, at 1080p. Our unit produced the line work and then the animation was delivered to Submarine in Amsterdam who did the color, backgrounds, and composite. Our workflow is based on traditional structures, with our animation team leads drawing key poses, senior animators drawing breakdowns, and staff animators drawing in- between frames.

We also produced 2016’s Emmy-winning documentary Tower using TVPaint. I’ve been working in TVPaint for 15 years now and find the software works well for our studio.

What do you like the most about the software?

I like how I can capture an idea, build animation, and produce finished work entirely inside TVPaint.

Why did you decide to realize your series using only the rotoscope technique?

Rotoscope allows the audience to relate directly to the actor’s performance but retains the flexibility of animated character animation. We used that flexibility for some of the more surreal moments in the series.

Why did you choose TVPaint to make this project rather than another animation software?

Our process is built on traditional animation pipelines. We find that TVPaint is a good platform for our hand-drawn frame-by-frame approach.

What are the benefits of TVPaint compared to other softwares?

The results we achieve in TVPaint are similar to what we would get working on paper. The animation is organic, and the hand of the artist remains evident. This is important for a traditional 2d look.

Start using TVPaint today for your own animation project. Visit the TVPaint web site to download a trial version.