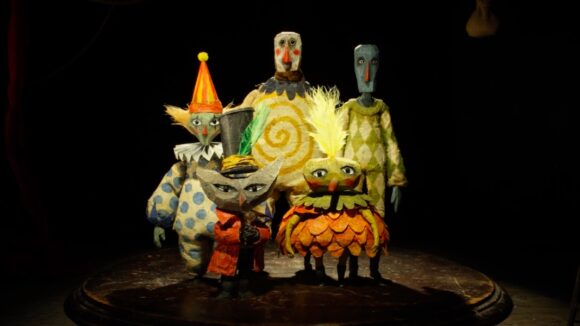 For the latest entry in our series, which looks at the coronavirus crisis from the standpoint of individuals in the industry, we speak to Joseph Wallace, an animation director based in Bristol, U.K. Wallace is renowned for his stop-motion shorts, including his graduation film The Man Who Was Afraid of Falling, which was nominated for a BAFTA Cymru award, and his music video for Sparks’s “Edith Piaf (Said It Better Than Me).” His latest film, Salvation Has no Name, was in production at Aardman Animations’s Bristol studio when the coronavirus hit.

Growing up in Bristol, Wallace fell in love with animation through the early short films of Aardman. So he was honored when, decades later, the storied studio invited him to direct his new short on its premises. He’d been developing Salvation Has no Name, an ambitious 16-minute stop-motion folk tale about the refugee crisis, for almost six years. Aardman co-founder Peter Lord admired Wallace’s work, and let the production set up in a corner of the studio.

The short, which is produced by Manchester-based Delaval Film, was a few weeks into its shoot — around a third of the way through — when the coronavirus reached the U.K. At the time, the crew consisted of Wallace, one trainee, and two animators. Frustrated by the government’s “lack of action,” Wallace decided to disband the production on March 20. “We gathered some useful equipment and materials we could take home and we were out. I think we were some of the last people working at Aardman.” Three days later, the country entered its current state of lockdown.

Wallace’s experience mirrored that of the stop-motion sector at large: “There’s a slightly narrow-minded narrative going around that the U.K. animation industry is open for business, but I don’t know a single stop-motion production which hasn’t had to shut down.” The director likens stop-motion production to theater, which he used to direct. “The animators are getting to grips with the puppets, they’re finding the characters through movement and dialogue… All of that energy and atmosphere is palpable, and will have to be built up again when we return.”

Rather than wait idly for the studio to reopen, Wallace has spent lockdown time tweaking puppets, editing, and focusing on voice work. Meanwhile, he and his producer decided to launch a Kickstarter to “help the production get back on its feet out the other side of quarantine.” The money would go toward production matters such as relighting and dressing the sets, extending the animators’ contracts, and hiring another animator and director of photography to make up for lost time.

The director was apprehensive: “It was a big risk to reach out to the animation community at a time when creatives and workers across the world are facing so much uncertainty.” So he was amazed when his initial goal of £7,000 ($8,700) was reached within days. He has now extended it to £10,000.

“The production was only kept afloat by a great deal of favors, passion, and a troupe of incredible collaborators working way below their normal rates,” he says. “This pandemic has fractured the production and put its future in jeopardy… We’re incredibly grateful for everyone’s support so far and cannot wait to get back and finish the film.”