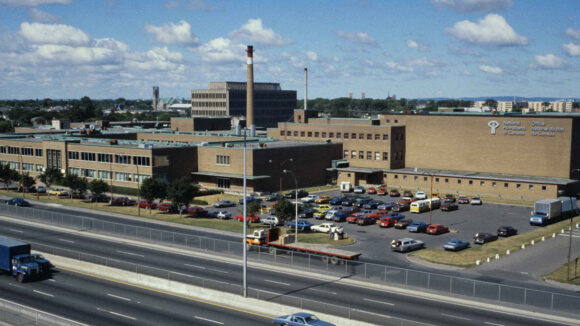 In September 2019 (though, given the many delays thus far, that’s just a rough guess at the moving date), the National Film Board of Canada (NFB) will bid adieu to their infamous old headquarters after 63 years (pictured at top) and say bonjour to a brand new space in the lively Quartier des Spectacles area of downtown Montreal.

Over the years, the NFB’s old building has been described as — take your pick — a rundown hospital, a mental institution, an abandoned factory, or adult high school. Those descriptions, born from seeds of loving nostalgia and bitter frustration, reflect the various high and lows of a globally respected film studio that has endured and thrived in spite of decades of meddling-hand stains left by bureaucratic and administrative vandals.

The old building at 3155 Cote de Liesse (technically in Saint-Laurent, Quebec, just north of Montreal central) right by the highway to Ottawa and near an assortment of car lots, has seen it all (sadly, no one will go on record with the long list of ‘nudge nudge wink wink’ tales)…yet there is one constant. Since 1956 (when the NFB moved from its original headquarters in Ottawa), the NFB has continued – despite massive cuts, questionable restructuring, and iffy leadership — to create some of the most beautiful, ground-breaking, and acclaimed films (animation and documentary) in the world.

As the NFB gets set to move to some shiny new digs, I asked some NFB veterans to share some of their funniest, fondest and not-so-fondest memories of the old building.

The most unexpected and funny thing I can say is that I will certainly miss the British colonial architecture style of the building. I always felt it somehow looked like a British colonial administrative building in the Bahamas, for example. It is not startling architecture, but every morning when I was going to work, it made me think of the Bahamas)…where I have never been! I will also miss the memory of Norman McLaren’s original studio that disappeared a long time ago. Every time I was walking there, behind the sound studios, I could remember and see the two rather small rooms where Norman and Evelyn Lambart where working.

It was always astonishing to me that so many groundbreaking and beautiful films could come out of such an ugly, prosaic building…but I somehow admired that lack of pretension.

Coming from California, it was like visiting ILM [Industrial Light & Magic] hiding behind a fake industrial storefront in San Rafael. You had to know what went on inside behind the trick appearance. The NFB building I first encountered in the late eighties was a rambling complex with enough renovations and layers of history that there were areas that you might never see, or might discover like in one of those dreams when in a familiar childhood home, a sudden basement or hidden wing appears that you never knew was there.

I came to the NFB just in time to be able to discover a shooting stage not yet completely privatized, filled at one moment with a giant pirate ship (was it for Roger Cantin’s Matusalem?)…and I recall scrounging in the costume department racks for a Halloween party…and trekking across the “bridge of sighs” to the abandoned and derelict administration building and imagining a time when that too was bustling with people…or more recently slipping down to the basement with its maze of overhead pipes, lit only with emergency lights and feeling like something out of The Shining.

I was, and still am, in awe of the creators that walked those NFB halls and loved to see the threads of history in the leftover artifacts: an animation stand on which Caroline Leaf worked, a pair of slippers worn by Norman McLaren, and bits of film footage tests shot by Sidney Goldsmith for the film Universe thrown into a garbage bin, or a file folder filled with reams of John Weldon cartoons, or notes & posters taped to the walls, thinly veiled chronicles of an animator’s daily life or the thousands and thousands of drawings and cels and props and stray bits of animation sets fighting for space in storage. What will we miss? Lots of history in the feel of real things.

What we won’t miss is location, location, location — long to reach by public transport, in a wasteland of car dealerships and highway with no pretty cafés to seduce one off to a long lunch. But like the passionate denizen of Nick Park’s Creature Comforts shouting, “We need SPACE,” I wonder how the new NFB will make do with square footage at such a premium. Will creators find themselves sighing for all that old space, those many rooms, nooks, and crannies offering both creative isolation and voluntary commune with other kindred spirits? These days when I pass by that familiar building off the Metropolitan [Autoroute 40] and see the name and logo, my heart still beats a little faster (and not just with residual stress). I know I will be a little sorry to see the logo come down.

Paul Driessen (director, Elbowing, The Writer, Three Misses, The End of the World in Four Seasons)

What I miss about the old building are the early seventies, when a lot of young talent from different parts of the globe were invited to join the Board; the wild parties we had at the French Animation [unit] where I made most of my films (I remember the one with the full bathtub in which people would cuddle up; or where, in turn, we sang songs of our various cultural backgrounds). The English Animation [unit]’s parties were more formal, standing up parties, having a humorous conversation with drinks in your hands.

At that time the French and English Animation were two separate worlds; they were hardly in touch with each other, only a very few animators from both sides would sometimes sneak in to check out the other side.

And every Wednesday there were screenings in theater six of recently made films, live, animation, whatever; everybody welcome, a very nice tradition.

Some animators who lived far from the awkwardly located Building would sometimes stay overnight, hiding in their offices, which was against the federal rules. I remember one guy in his pajamas being led away by one of the guards when I came in one morning.

At an Xmas party in, what we called the New building, we once had two ‘streakers.’ I think they were Co Hoedeman and Anthony Kent. Since they were naked I had a hard time recognizing them.

I guess what I miss most are the adventures of my younger years of which I spent many in that building. Like cycling from downtown Montreal to the Film Board in the morning and trying to get back after the first snowstorm had hit the city that day, carrying my bike on my back through the piled-up snow banks.

What I won’t miss are the long, long corridors — from the far end someone would approach you and it was hard to get the knack of the right timing to say, ‘How are you,’ and ‘Not too bad’ in response.

And boy, it was really an ugly building in an ugly spot.

Torill Kove (director, The Danish Poet, My Grandmother Ironed the Kings Shirts, Me and My Moulton)

I will not miss:

I loved the early 2000 era when we played volleyball in the parking lot during lunch.

And the pre digital-era when we had rushes. Those were the days.

Sneaking out for a break on the roof.

Or, did you mean that time when I walked into what’s their names in the Steenbeck room? Unbelievable.

It always seemed like an incredibly lucky break for me that I ended up working there, and I guess I’ve just always felt a kind of gratitude towards it and the institution it has housed for all these years.

I’ll miss the ghosts of the artists, who passed away. The tortured souls of Lipsett, Larkin, and McLaren were coming often to visit us)…

I won’t miss the ugly, school-like canteen with the awful food served there. If you survived a lunch at the cafeteria, you are ready for the army or a humanitarian mission in Africa. Also the corridors, reminiscent of a psychiatric clinic.

There are many favorite stories: Arthur Lipsett chain-locking his Steenbeck because he was afraid of getting his ideas stolen. And of course, there are many loves that happened there. I cannot tell them here, cause we will fall into 18+ area)…

Janet Perlman, Oscar-nominated animator (animator/director, The Tender Tale of Cinderella Penguin, Why Me?)

I will miss the cafeteria, a place where filmmakers could informally cross paths, exchange ideas, and inspire each other. In the new building there will be no cafeteria, but there are lots of fast food places. Not at all the same thing!

I may miss privacy and space – I think there will be less of both.

I will not miss the uninspiring location in out-of-the way Ville St-Laurent. Nestled between two car dealerships on a highway service road. Also, the 20th Century Institutional Functional architecture.

My fondest memory is the two Bob Ross group painting events which I organized, one in the English animation studio, and one in the French. There were about 12 participants in each, including animators, office staff, producers, including people who have never painted since childhood. There is presently a Bob Ross room in the French studio, displaying the paintings along with artist’s statements. I hope there will be room for such wonderful silliness in the new headquarters.

Some of us had noticed a couple of elderly persons having lunch at the cafeteria. We were curious to know who they were. Here is what they said: “We are senior Americans visiting Montreal. From the highway, we recognized the NFB logo on the building and thought: There it is — let’s go in!” So for a whole week, they had found their way to the library and entered some screening rooms to watch films. They had the time of their life and nobody bothered them. That may not happen again…

It was my home for 37 years. I miss the people, I miss the ambiance. Each corridor had so much meaning. People I worked with every day.

I miss people that came everywhere from the world to meet Norman McLaren and other filmmakers: Louis Malle, Wim Wenders, Leni Riefenstahl, Jean-Luc Godard, Lotte Reiniger, Indira Ghandi, and so many more. Ugly place for some. For me a fantastic place with so many talented artists, technicians, and government employees.

One story that I heard so many times is that, when the building was built, the employees came to work and went directly to their office via the windows [because] it was easier. True or not, I will never know.

During those years, every corridor meant something: French Program, 2nd Floor, English Program, 1st Floor. English and French Animation departments, so far for everybody.

And then there was the ‘pool’ in the basement. It was really a large basin. The lab was dealing with all kinds of chemicals to develop the films. I think they had a system that went from the second to first floor. I remember the smells! Probably a bit toxic, but safe. In any case, in case of a major spill, the chemicals would land in that big ‘pool,’ not on the ground.

Or the rats floating in Windex. I heard that so many times.

I got really lucky to be there, in that ugly building for so many years. It made my life so much richer.