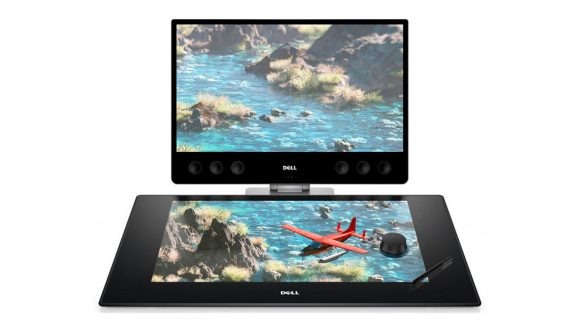 For anyone looking to purchase a tablet monitor in 2017, you’ll find more high-quality choices available than ever before. The latest company to enter the arena, Dell, is a respected name in monitor hardware, and their new product, the 27-inch Dell Canvas, was announced with plenty of fanfare this week at the CES expo in Las Vegas.

The Canvas is described by Dell as a “horizontal smart workspace.” It is not an all-in-one computer like Microsoft’s Surface Studio, but a tablet display that requires a computer, so the closer comparison would be to the Wacom Cintiq 27QHD. The almost-19-pound monitor can be used flat or on an angle, but it’s not really designed as an upright monitor. Dell is counting on the fact that most graphic artists nowadays work with a dual-monitor set-up, and they’ll want to use the Canvas as a secondary display/drawing tablet while having an upright behind it.

There are varying reports about the stylus technology used on the Canvas. The website Surface Pro Artist reported that there will be some Wacom compatibility, but to what extent is not yet clear:

“The 27-inch Canvas pen display uses Wacom EMR technology and will ship with a Wacom driver. It’s not known whether the driver will be the Feel driver found on other tablet PCs or the fuller-featured tablet driver found on Wacom’s Cintiq products.”

The display is 2,560×1,440 resolution, which is the same as the 27-inch Cintiq, but less than the higher-than-4k Surface Studio resolution, which comes in at 4500×3000. On the other hand, while the Surface Studio has 10-point multi-touch, Dell’s Canvas has a 20-point multi-touch screen, allowing multiple people to work on a project simultaneously (or opening up the tantalizing possibility for a single person to create art using all of their fingers and toes at once).

Similar to the Surface Studio, the Dell Canvas comes with dials (Dell calls them Totems), but reports indicate that, unlike the Surface, the Dell dial only works while it’s touching the screen. On the other hand, multiple “totems” can be used on the display at once.

The Canvas will be available at a retail price of $1,799 in the U.S. on March 30, coinciding with the release of Windows 10 Creators Update.