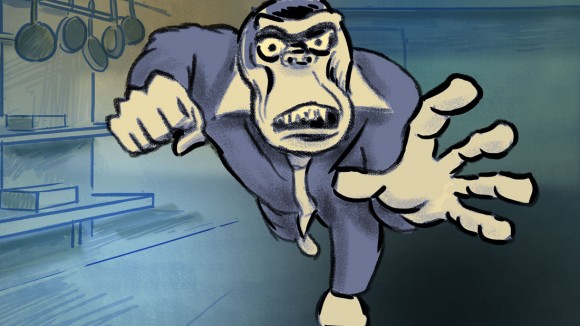 The new stoner comedy/spy thriller American Ultra opened quietly in sixth place last weekend, so a lot of people might have missed the news that the film revolves around a slacker cartoonist or that the film ends with an animated sequence.

In the film, Jesse Eisenberg plays Mike, a cartoonist/CIA sleeper agent who has created his own comic character called Apollo Ape. The end of the film — and this won’t give anything away — brings to life his creation for a gory, over-the-top cartoon finale.

The animated credits sequence has been singled out by numerous reviewers, with some calling it a “major highlight” and the “most creative and witty part of the entire film.” Variety even went so far as to write: “Only at the end, with completely off-the-wall animated closing credits that embrace the film’s latent surreality, do we finally get a glimpse of what American Ultra has been aching to become.”

If the credits capture the raw energy and style of an indie cartoonist of the type that Eisenberg portrays in the film, that’s because it was created by an indie cartoonist and filmmaker: Manhattan-based Gary Leib, who directed and animated the piece singlehandedly.

A multi-hyphenate talent, Gary has led a distinguished creative career, having been nominated for a Harvey award for his comic book Idiotland (created with Doug Allen) and a Grammy for the new wave band he co-founded, Rubber Rodeo. He has contributed animation to numerous live-action projects, most famously the Harvey Pekar biopic American Splendor, while more recently, he created the Concrete Jumble animated series for the NY Times website.

Cartoon Brew conducted this interview with Gary via email today to find out about his latest gig on American Ultra.

CARTOON BREW: American Ultra seems like a perfect gig for you because your animation represents the work of the film’s main character — a cartoonist played by Jesse Eisenberg. Can you give a quick overview of how the filmmakers found you and how you became involved with the film?

GARY LEIB: The producer of American Ultra, the great Anthony Bregman, is my friend. I have been lucky to work on some his productions starting with his first film in 1996, Love God. When they wanted cartoon animation for this film, Anthony called me in to meet director Nima Nourizadeh. We hit it off, and I was hired and started drawing stuff immediately. This was on a Thursday afternoon and they wanted some animation for a test screening the next Monday night. I drew stuff all weekend and created a simple animatic, Apollo Ape smashing some bad guys. This went well, and I got the job.

CARTOON BREW: How did you get started on it — were you given a script or a storyboard? How did you collaborate with the director Nima Nourizadeh? Was there a lot of back and forth on your sequence?

GARY LEIB: There was no script, and lots of back and forth. After the initial animatic, I worked directly with Nima developing the boards and making animatics. The character Apollo Ape was designed by John Martel, a New Orleans based artist who did the art you see in Mike’s studio [Eisenberg’s character] and in some of his sketchbook drawings. I was given a copy of his prop sketchbook to get me started. I should also note the type design is by the great Randall Balsmeyer.

It was a very organic process, the editing room was a 10-minute walk from my studio so i would work on a chunk, Dropbox it to editorial, and then either watch it in context with Nima and editor Bill Pankow or just get notes and carry on. I was given a lot of creative freedom with the visuals, colors, and design. Nima guided the narrative and came up with many cool ideas. We had fun brainstorming sessions and the story just grew.

CARTOON BREW: How long did it take you to produce the sequence?

GARY LEIB: From January until late May I was drawing and compositing all the time. I was pretty much all Ultra, all the time, for the first half of 2015. Being given so much leeway was inspiring. I felt so lucky I just pushed myself every day. I also made a sketchbook prop that was used in insert shots of Mike drawing.

CARTOON BREW: You used Photoshop for the animation, but you’ve used Plastic Animation Paper on many of your earlier animated projects, like your Concrete Jumble series for the New York Times Op-Ed section. Why the software switch?

GARY LEIB: I was very sad to not use my beloved Plastic Animation Paper on this job,but I was running Windows XP in Parallels on my Mac, and switching back and forth between platforms was super cumbersome. This was drawn entirely digitally — no Cintiq, just a Wacom tablet. I learned great things from Alex Grigg’s great on-line tutorial (thank you Alex!) and used his workflow advice. I made chunky brushes in Photoshop that I loved drawing with. What I did carry over from my PAP technique was drawing frames in grayscale and “coloring” things in After Effects with filters. This gives me lots of control over the color and lighting effects, and makes changing those things easier.

CARTOON BREW: How has your experience as a print cartoonist informed and influenced your approach to animation?

GARY LEIB: I am primarily influenced by comic books from the ’50s through the ’80s (EC comics, MAD, Zap Comix, Raw). Trying to draw like these geniuses keeps me inspired every day. The best work from that era transcended expectations of what a comic book could be: extreme violence, subversive humor, and brutal horror was presented with beautiful, seductive artwork. American Ultra was a perfect opportunity for me to combine my love of those comics with animation, making every new situation Apollo Ape encounters surprising. You want to see what happens next. I also cried my eyes out as a kid when the Fleischer Studios’ Gulliver’s Travels ended and all the Lilliputians wept when Gulliver went home. I was scarred for life by this.

See more artwork from the project on Gary’s Tumblr.