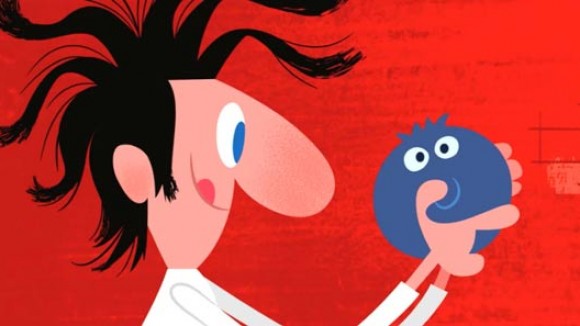 Among the abundant visual delights of last year’s Cloudy with a Chance of Meatballs 2 was the expertly executed end credits sequence, which has now been posted online. The mixed media sequence, directed by Craig Kellman and Pete Oswald, combined stop motion (produced by Screen Novelties) and Flash in a peppy Cartoon Modern-influenced package.

Bill Hader, the voice of the lead Flint Lockwood, appeared on Conan a couple nights ago to promote Cloudy 2′s DVD/Blu-ray release

. Hader and Conan O’Brien, who appears in the end credits as Cornan, didn’t exactly do a good job of promoting the efforts of the people who worked on the sequence, with Hader even going so far as to call the stop motion models ‘disgusting.’ Here’s their exchange:

Conan O’Brien: The movie company sent us the actual model for it. And I was like thinking, I’m ok with it. I just don’t know what’s going on with Andy.
Bill Hader: Candy Richter.
Andy Richter: It looks like a molar that was found outside an auto crash.
O’Brien: It’s also clearly they’re using my real hair here. It’s always nice—they’ve got the real Conan effect.
Hader: [laughing] A molar outside a car crash.
O’Brien: It’s very upsetting. It’s so nice that someone went to all that trouble to build that.
Hader: Here’s this disgusting thing.
O’Brien: Yeah, enjoy that.