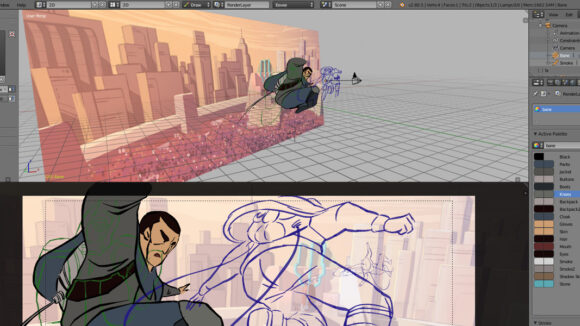 The debate about 2d versus 3d animation is becoming increasingly irrelevant as more artists use an integrated 2d/3d approach thanks to the new generation of powerful animation tools.

Earlier this year, Blender unveiled a new short film called Hero and, through that film, revealed what its Grease Pencil 2d animation toolset was capable of, including how the toolset integrated into the 3d capabilities of the larger Blender software.

Blender is positioning Grease Pencil as a way of combining more traditional 2d animation into a 3d pipeline. A number of other 2d animation tools also have 3d capabilities, ranging from the incorporation of 3d models into the workflow or the introduction of depth into a scene.

We’ve rounded up some of these tools that combine 2d and 3d workflows for artists who are seeking to broaden their stylistic and technical range.

Two of the giants in animation software, Toon Boom Harmony and TVPaint, are well known for their 2d animation solutions. But they also offer several ways in which 3d animation can be done. An obvious area is perhaps via the use of z depth, or multiplane cameras, within the pieces of software.

“Harmony and its predecessors have always had the third dimension, the z axis, on which the camera can be moved along and drawing layers can be placed at different depth,” said Toon Boom Animation’s director of marketing George Stamatakos. “Layers can be set along the z axis and the camera dollied across or trucked along the z axis, with the drawings at different depths moved to create a parallax effect. This can be done without using any 3d models.”

Similarly, TVPaint has a multiplane camera feature, as head of communications at the company Benjamin Cerbai, explained: “This is not a 3d camera tool, but you can control movement of several planes with background scenery. Each plane has a specific depth and, consequently, its own speed in the eyes of the observer. It is based, like many parts of TVPaint, to emulate a physical tool that was used for traditional 2d animation.”

The second kind of 3d integration, which is available in Toon Boom Harmony, is the ability to import and display 3d models. This is something often done in collaboration with another purpose-built 3d tool such as Autodesk Maya. Harmony supports various 3d file formats such as FBX, Alembic, OBJ, and 3DS, with imported models able to be moved, scaled, and rotated on any axis. Stamatakos suggests Harmony users often incorporate 3d models into their scenes for sets, or large objects such as props or vehicles. Sometimes they are imported simply as reference and for ‘draw-overs.’

“When 3d models are not used as reference and need to be rendered in the final frame,” said Stamatakos, “they can be rendered through the video card by Harmony for quick compositing, or in Maya through Harmony.” Boulder Media recently used this approach for the Danger Mouse re-boot to animate the hero’s car.

TVPaint users, too, are able to extend their 2d scenes in some ways with 3d models and rendering. Oftentimes this involves the creation of basic 3d models and camera movement in other software, such as Cinema 4D, and then bringing those models into TVPaint to rotoscope them. Blue Sky Studios used TVPaint on The Peanuts Movie to add some drawn elements of characters’ faces to help achieve expressions that evoked the look of the original Peanuts animated series. Images were rendered from 3d software and then imported into TVPaint so that animators could draw the animated lines directly. Cerbai also indicated to Cartoon Brew that animator Paul ‘OtaKing’ Johnson has done this with much success for his retro anime-themed 2d pieces, including his hugely popular TIE Fighter short (see above).

The approach of Grease Pencil

Since Blender of course started as 3d software, its move into 2d animation has held onto many of these 3d capabilities. These include bringing in 3d models to make them fit in with 2d artwork, being able to use 3d geometry for rotoscoping or reference, using 3d cameras and layout, and using Blender’s modifiers on 2d geometry.

Grease Pencil has actually been part of Blender for a number years, initially as an annotation tool to allow artists to draw on top of the interface, and subsequently as an actual storyboarding tool within a 3d scene. For the short film Hero, Blender Institute producer Francesco Siddi notes that, while 2d animation was done with Grease Pencil, Blender’s 3d capabilities were used to define the layout of complex scenes and produce advanced lighting, while retaining the ‘look and feel’ of a 2d animated project.

And while we’ve talked in this article about the notion of these various tools bringing 3d models into a 2d environment, Grease Pencil also offers the reverse of that, as Siddi explains. “Grease Pencil strokes essentially behave like polygonal geometry. A new type of object called ‘Grease Pencil Object’ was created. This object type mirrors several properties from the Bender ‘Mesh’ Object and can therefore be well integrated into the regular 3d pipeline.”

Ultimately, artists working in 2d or 3d animation tend to use a variety of tools to tell their stories. But with software now allowing for more hybrid approaches, we’re perhaps likely to see a new increase in 2d and 3d cross-over.