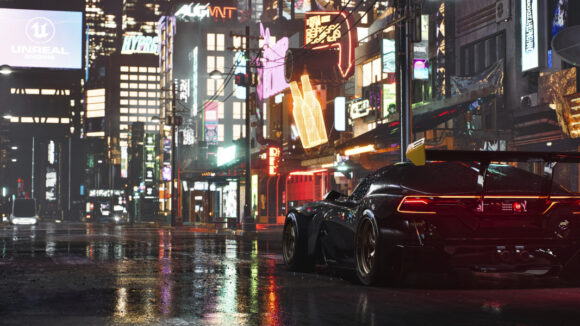 The highly anticipated release of Unreal Engine (UE) 5.1 is here, and with it come some pretty spectacular changes for those working in animation and vfx.

UE 5’s impact on animation proved undeniable. Originally, and primarily still, a tool used by the gaming industry, the number of people who are using UE for animation and vfx work has skyrocketed in recent years. In 2019 there were three stages in the world using UE’s in-camera visual effects. Today, that number is over 300. In animation, UE tracked 15 projects between 2015 and 2019. From 2020-2022 that number jumped to 160 projects, and those are only the projects that UE is aware of.

While explaining the changes from UE 5 to 5.1 to Cartoon Brew, Miles Perkins, Epic Games’ industry manager for film and television, explained, “If you only take one thing away from this, it’s that we’re honing in on the artist, and how the artist can use this tool. Real time is super powerful. Sometimes we’ve had to take two steps back to take five steps forward, but that’s what we’ve done. Now we’re starting to really focus on these workflows and coming up with the next iteration of how to create content in this space.”

Working in Unreal can be intimidating. It’s a massive toolset that can do so much more than most animators or storytellers need. That being said, it’s not just big studios or highly-trained technicians that are benefiting by using UE to produce their work. Hundreds of independent and solo animators are producing animation faster, and easier than they were able to do with other toolsets.

“Those are the people that we find are having the most success with these tools,” explained Jeremiah Grant, Epic Games’ tech product management director for rigging and animating. “As an independent filmmaker or storyteller, you can get into this system and tell some really incredible stories. What we’ve seen is that small teams of sometimes only five or ten people can be incredibly productive with Unreal because they dive all the way in and find traction more easily than some big studios.” Changes for Animation and Rigging in UE 5.1

UE 5.1 has seen some major changes that should benefit artists who use the software for animation and reduce the need for round-tripping with DCC applications.

Currently in Beta, UE’s Machine Learning Deformer can be used to create high-fidelity approximations of nonlinear deformers, complex proprietary rigs, or any arbitrary deformation using a custom Maya plugin to train a machine learning model. That model then runs in real time in Unreal Engine. Users can take advantage of these updates to better simulate high-quality deformations on characters such as flexing muscles, bulging veins, and sliding skin. There have also been improvements made to the Deformer Graph Editor which should make for easier graph creation and editing.

UE 5.1 has extended Sequencer — its multi-track nonlinear animation editor — by adding support for constraints and by exposing additional functionality through Blueprint and Python scripting. In addition, the engine has refactored the UI/UX for increased stability and extensibility, and to improve animation authoring and editing workflows.

For procedural rigging, UE 5.1 has a new Construction Event that allows users to generate rig hierarchies via a graph, and new Custom User Events which can be used to create and trigger rig events such as “Snap FK to IK.”