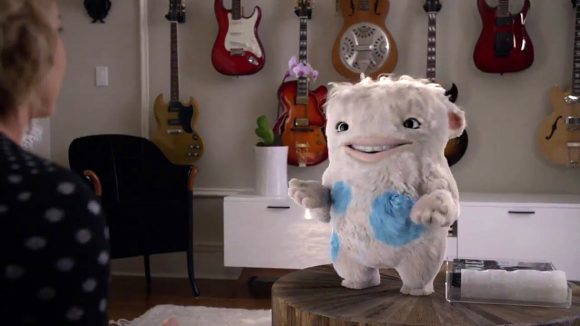 This week, ABC released new photos from its mid-season replacement series, Imaginary Mary, a quirky-looking live-action/cgi hybrid that boasts the involvement of Patrick Osborne, the director of Disney’s Oscar-winning Feast and the currently-Oscar-shortlisted Google film Pearl.

The show stars Jenna Elfman (Dharma & Greg, Friends With Benefits) as Alice, a “fiercely independent career woman” whose life is turned upside-down when her imaginary childhood friend, Mary, reappears to offer her advice on a relationship with a divorced father who has three kids. The imaginary friend, voiced by Rachel Dratch (Saturday Night Live), is a cg character designed by Osborne, who is an executive producer on the series.

The character can be seen in the trailer below , which includes footage from the pilot, but here’s something to keep in mind: per a report last fall in Deadline, ABC is in the process of retooling the cg character. Notably, the photos released by ABC this week were only of the live-action actors, but did not include the updated “Mary”:

ABC has cut the first-season order from 13 to 9 episodes, most likely due to the longer production time needed to incorporate a cg cartoon character into a live-action series. (FOX’s Son of Zorn, another recent series that integrates live-action and animation, also ended up with a nine-episode first season.)