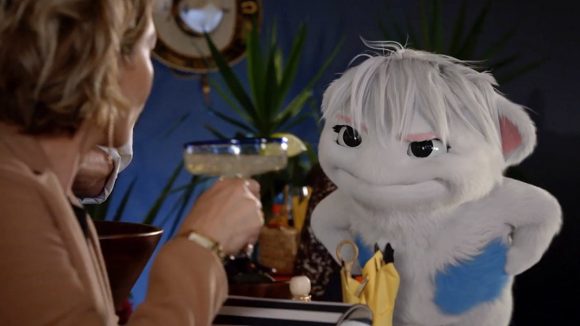 The lead cartoon character in ABC’s upcoming live-action/cg hybrid series, Imaginary Mary, has an updated look, as revealed in this new ABC trailer:

The mid-season replacement, which has a nine-episode order, also has an official launch date now: March 29.

As mentioned a few days ago, the animation portions are being overseen by Patrick Osborne, director of Disney’s Oscar-winning Feast and the currently-Oscar-shortlisted Google film Pearl. The animation studio hasn’t been announced, but online sources indicate that it’s being produced by Zoic Studios in Vancouver.

The show stars Jenna Elfman (Dharma & Greg, Friends With Benefits) as Alice, a “fiercely independent career woman” whose life is turned upside-down when her imaginary childhood friend, Mary, reappears to offer her advice on a relationship with a divorced father who has three kids. The imaginary friend is voiced by Rachel Dratch (Saturday Night Live).

After the show’s test pilot was produced last year, ABC requested changes on the animated character, which has since evolved into a rounder, cuter, moppet-like creature without big teeth or lips. Here’s a comparison between the first version of the character from the test pilot (bottom), and the updated version that will appear in the series (top):