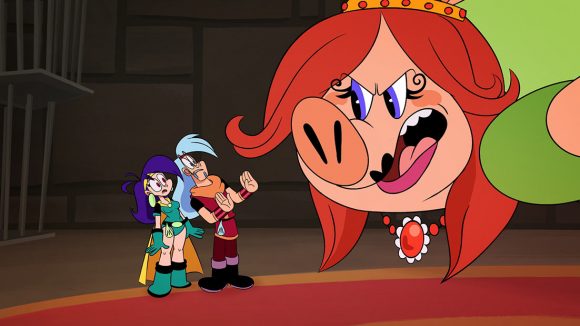 Cartoon Network is expanding its cross-platform project Mighty Magiswords with the launch of a linear series on Thursday, September 29, at 6:30pm ET/PT.

The concept originally launched last year on the CN Anything app as a 15-second micro-series, and along with OK K.O.!, is representative of the network’s attempt to engage young audiences with fully-interactive multi-platform properties rather than traditionally linear broadcast IP. “Mighty Magiswords is custom created for the way young audiences consume media today,” said Rob Sorcher, chief content officer for Cartoon Network. “This is about how stories can be told in new ways and how a community can play together.”

Created by Kyle A. Carrozza (MooBeard the Cow Pirate, The SpongeBob Movie: Sponge Out of Water), Mighty Magiswords follows sibling “warriors for hire” Prohyas and Vambre who complete quests using their collection of Magiswords that can fly, toss tomatoes, spit seeds, and perform other fantastic tricks.

The series is only one piece of the broader Magiswords universe, which according to CN, contains more than 400 pieces of original content including interactive shorts, narrative vlogs hosted by the warriors, and digital games. A new interactive app launching this fall will connect all the pieces and allow users to “watch and collect Magiswords in a fully-engaged ecosystem.”

A special sneak peek episode of Mighty Magiswords will debut on the Cartoon Network app this Friday.