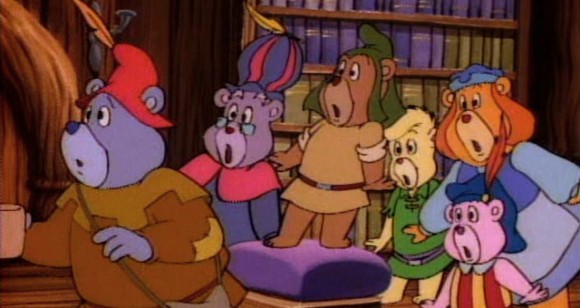 If the idea of a movie based on Pez candy sounds silly, just remember Disney’s TV series Adventures of the Gummi Bears, a series that debuted 30 years ago on this day.

Then-Disney CEO Michael Eisner was inspired to develop the series after one of his boys requested the candy. Eisner was so invested in the series that he personally sold it to NBC. The translucent gelatinous blobs were re-imagined by show creators Jymn Magon and Art Vitello as a family of six — the Gummi-Glen Gummis clan — who were members of the nearly-extinct Great Gummis race. The bears, who bounced here and there and everywhere after they drank Gummiberry Juice, were hunted by Duke Sigmund Igthorn and his ogre troops.

The series, which premiered on the same day as Disney’s The Wuzzles (a co-production with toy manufacturer Hasbro Bradley) was a success, lasting six seasons and over 90 episodes. Notably, these two shows were the first ones ever created by Disney Television Animation.

Today, we don’t think twice about Disney creating TV animation like Gravity Falls, The 7D, or Wander Over Yonder, but 30 years ago, the idea that the standard-bearer of American animation would degrade itself by producing TV animation was a highly contentious proposition amongst both critics and the studio’s artists. “To save dollars, both shows will be voiced and designed here, but the actual animation work will be done in Japan and will employ cheaper limited-animation techniques,” wrote David Friendly in the Los Angeles Time. “[T]his wouldn’t seem likely to enhance the company’s historic achievements in the animated arts.”

“The Disney quality has always been so unique, and it’s what set the studio apart,” Disney artist Jane Baer told the LAT in a piece about the controversy surrounding Disney’s decision to produce the “limited animation” Gummi Bears. “To see it deteriorate would just be a tragedy.”

Fears over the show’s quality were unfounded. True, the series was no Bambi or Cinderella, but it was also not the typical early-80s crud that many expected it to be. The success of Gummi Bears paved the way for other above-average Disney TV productions in the late-1980s and early-90s, including DuckTales, Chip ‘n Dale Rescue Rangers, TaleSpin, Darkwing Duck, and Goof Troop.

In our current era of Pickle & Peanut and Two More Egg Tuesdays, the discussion of quality in Disney animation seems downright quaint. But thirty years ago today, Disney didn’t just premiere a TV series; the studio forever changed the trajectory of its business model and became a major producer of all types of animated entertainment, including TV animation. Zummi, Gruffi, Grammi, Tummi, Sunni and Cubbi were the Gummi Bears who proved that Disney could do it well.