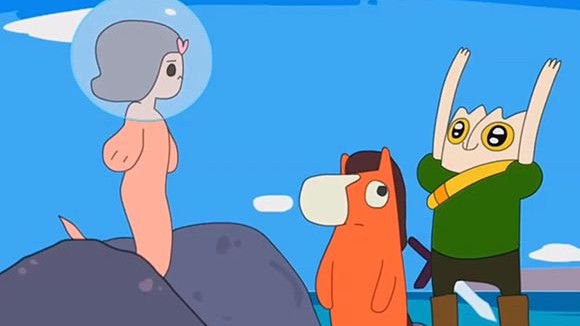 Someone posted The Legend of Lucky Pie on YouTube today claiming that it’s an actual cartoon produced in China. Can anyone confirm if this is real?

Whether it’s an honest-to-goodness knock-off or an elaborately produced hoax, the people who made it have certainly spent a fair amount of time studying Adventure Time. (See update below)

Another website points out that a Chinese studio (the same one?) produced a Gumball knock-off to advertise a food product called Miracle Star.

Now we have to ask, Why did both of these Cartoon Network-inspired pieces suddenly appear online today? If you know who’s behind this, let us know.

UPDATE: Wendy Zhao has helped us solve the msytery of these cartoons. She writes:

The Lucky Pie short is currently one episode long, debuted around January 1, produced by what seems like just a team of enthusiastic animation friends (there’s a photo of them here). In these posts introducing the show, they talk about how even though they have no funding and no fancy computers or studio setup, they are determined to make this show and fight the ‘tacky’ and ‘trite’ animated shows usually shown in Chinese media.

Here is a thread in Chinese that raises the question, “What do people think about claims of this show ripping off Adventure Time?” and answering it along the lines of, “Kind of, but not really.”

As for the second [Gumball-style] video, here is a Wiki page about it. I highly doubt that it’s made by the same people as above. The characters in the show have also appeared in some product commercials so it seems to have been in existence for some time.