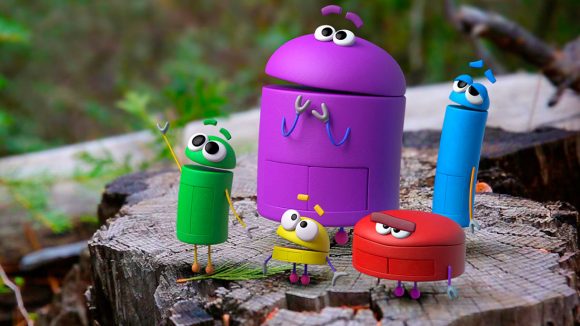 “Over the years, we’ve built one of the strongest art teams in the industry,” says Evan Spiridellis, who co-founded Jibjab in 1999 with his brother, Gregg. “I’d go toe-to-toe with any of the big studios when it comes to talent.”

That talent has helped Jibjab grow into a flourishing 80-person digital entertainment company that generates revenue through e-cards, emojis, gifs, e-learning apps, and most recently, sticker apps for Apple’s iMessage. The only missing piece of the puzzle has been a long-format showcase that allowed the studio’s artists to stretch out and utilize the full extent of their talents.

That changed though in August, when Jibjab premiered Ask the Storybots, a six-episode original preschool series on Netflix. For those who have kids, the Storybots—a quintet of cylindrical creatures named Beep, Boop, Bing, Bang and Bo—might already be familiar; the idea was launched in 2012 as a digital brand encompassing e-books, apps, and online videos.

The Netflix show, a mixed-media concoction that combines puppetry, cgi, live-action, and 2D—sometimes all in the same shot—is the most ambitious iteration of the characters yet. In each half-hour episode, the Storybots investigate a child’s question, such as “Why is the sky blue?” or “Where do French fries comes from?,” and try to figure out a scientifically accurate answer.

The Spiridellis brothers understood the importance of making a strong impression for their studio’s first long-form project, especially considering that the market they were entering—early education—is known for shows that tend to be “rote and saccharine,” as Spiridellis puts it.

The show was set up “in a way that individual artists can make big contributions,” Spiridellis says. “There isn’t a style that runs through the whole show.” The show has “anchors”—for example, when the Storybots enter the human world, they always appear in cg, while at Storybots headquarters, they have an outline-less 2D look.

But other sequences are open to the interpretation of the artists. “That really enables us to let the team do what they do best,” explains Spiridellis. “Which means, ‘Hey you like painting this way?’ ‘Well, paint that way.’ ‘You like making puppets?’ ‘Go make a puppet.'”

Another unique aspect of the production is that the vast majority of it was created in-house at the company’s headquarters in Venice, California. “We’ve got the ability to board, design, animate, post—we can do it all in-house,” says Spiridellis. He estimates that over 95% of the series was made at their studio, with a handful of remote contractors.

If letting the characters look different throughout the episodes and making the show almost entirely in Los Angeles are unconventional approaches, then the business side of producing Ask the Storybots is downright bizarre. Jibjab funded the production of the Netflix series entirely themselves, a nearly unheard of arrangement in Hollywood. “That’s like the number one rule in Hollywood: don’t fund your own project,” Spiridellis says. “But we believed in it strongly enough [and] by not taking somebody else’s money out of the gate, it gave us the freedom to make whatever we wanted.”

Putting the company’s own money into the production has clear upsides, the primary one being that Jibjab retains ownership of the episodes, which they can continue to exploit for years after their Netflix deal expires. Spiridellis, however, cautions that the approach may not work for other companies.

That’s because for Jibjab, a Storybots TV series wasn’t the ultimate goal; it’s simply one more stepping stone to turn Storybots into a multi-platform franchise. “We could risk our own capital in funding this because we have other ways to make money around the content besides just this TV production,” says Spiridellis. “For us, the TV show is one piece of the overall puzzle, which is can you raise awareness for these characters and for this brand? And if you can, then they’ll come to the app store and there’s something there that people can try for free or purchase.”

While Jibjab still has to rely on partners for distribution (Apple for its apps or Netflix for broadcasting), it has managed to do a remarkable thing that few independent studios have been able to achieve: retain complete ownership of its characters while creating a revenue stream that allows it to keep expanding the brand.

Spiridellis says that further announcements about the expansion of the Storybots universe are still to come. Whatever those announcements may be, expect the Spiridellis brothers to find a way to put their own twist on it.

Ask the Storybots can be viewed on Netflix.

Over the next few days, Cartoon Brew will debut exclusive new videos offering a behind-the-scenes look at the production of Ask the Storybots.