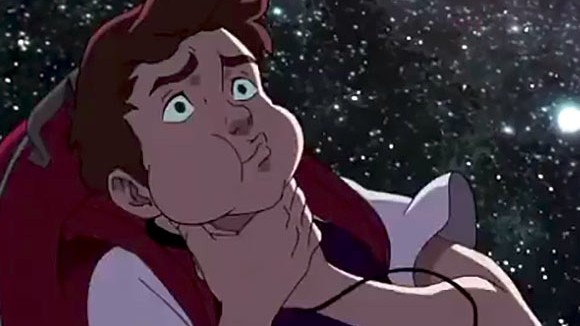 Entertainment Tonight scored some new footage from Disney XD’s upcoming Guardians of the Galaxy series. Watch it below:

The series unfortunately looks nothing like the attractively designed and lovingly inked test footage that was shown at New York Comic Con last fall. Thankfully for Disney though, the bar is set so low for American action-adventure animation that fans online are already praising the show’s quality over Marvel’s other series on Disney XD.

Marvel’s description of the series:

The series follows the newly-formed team who finds a strange artifact keyed only to the DNA of Peter Quill. Upon opening it, Quill unleashes a treasure map leading to a powerful weapon known as the Cosmic Seed which is capable of giving birth to the next universe. It’s up to the Guardians to find, protect and ultimately destroy the Cosmic Seed in order to keep it out of the hands of those who would abuse its power, from galactic big boss Thanos, to the conniving brothers the Collector and the Grandmaster, to a resurrected Ronan, to the ultimate trickster, Loki, in order to save the universe.

A series of animated shorts related to the series will start airing on Disney XD tomorrow, followed by a sneak peek on September 5, and the one-hour series premiere on September 26.