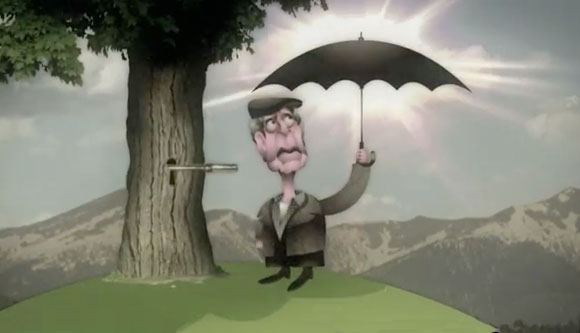 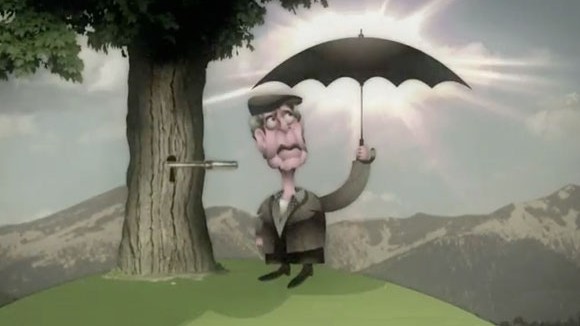 “The piece, which illustrates the hallucinatory visions of scientist Walter Bishop, was produced in less than two weeks. With such a compressed schedule, the characters (designed by Saharat Tantivaranyoo) and storyboards (created by Franklin and Anna Hollingsworth) needed to be locked the first week, while animators analyzed dozens and dozens of Gilliam’s cut-out cartoons from Monty Python’s Flying Circus in preparation for the final stretch of animation.

“Studio photographer Dave Vamos took production pictures of his own pudgy fingers, used to depict a giant hand plucking Dr. Bishop into a psychedelic dreamscape. The stomping foot, a direct homage to the famous Python title sequence, belongs to production coordinator Nick Butera. Butera’s foot was the perfect match to the original but required shaving and a little airbrushing work by animator John Dusenberry.

“The pictures were animated with painstaking attention to every Gilliam idiosyncracy, by the aforementioned Dusenberry and Hollingsworth, along with Frank Macchia and Kelly Turnbull. The final animation was edited and composited by Tony Christopherson, who added layers of digital paper, authentic film grain, projector gate jittering and blotches to replicate Walter’s stoned memories of watching Monty Python back in the 70’s.”