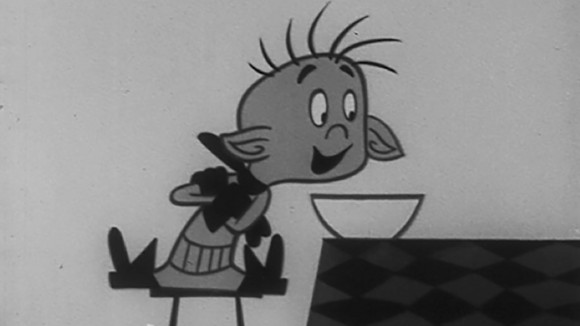 One night as I was Googling around indifferently, I thought to myself, “Gosh! I haven’t seen those marvelous John Hubley-directed Marky Maypo spots in at least 30 years. I wonder if I can find them on the net…” (I always think to myself with three dots at the end…)

About a second-and-a-half later, my search yielded four of them, on a website linked to the company that still makes and sells Maypo after all these years. These spots made a huge impression on me when I first saw them on TV – I was four – and they still do to this day. I know Jerry posted these a couple of years ago, but they’re certainly worth revisiting – and if you’ve never seen them before, enjoy! Here is the original spot:

I’d file them under the sub-heading of “The Pleasures of the Deceptively Simple.” Yes, they’re stylized. Yes, they’re graphic. They’re also masterpieces of communication and entertaining advertising, boasting many innovations and good old-fashioned traditional know-how. First, there’s the soundtrack: the husband-and-wife team of John and Faith Hubley recorded semi-improvised dialogue, charming mistakes and all, with their young son Mark, making the character sound like a real kid. Wow, what a concept! (The Hubleys later used this technique, with their offspring, in their many personal short films, like Moonbird and Cockaboody, and almost-as-talented adults like Dudley Moore and Dizzy Gillespie, in films like The Hole and The Hat.) Then there’s the design and animation. UPA-style flattened (practically vertical) perspectives, graphic curlicues that somehow behave like oatmeal, and character animation – most of it by master animator Emery Hawkins. Hawkins’ animation has – despite the stylization – form, weight, timing, tons of appeal, and all the other stuff you would expect in a beautifully crafted, traditional production.

Here are links to the other three spots. While the last spot doesn’t quite hold up for me, compared with the other three, they’re all marvelous, and, I think, worthy of some serious scrutiny.

The Hubleys were masters at making the abstract appealing and accessible, and it’s great to see these ads again as the precursors and colleagues of their innovative short films of the late 1950s and early-’60s, especially The Tender Game and The Adventures of *.